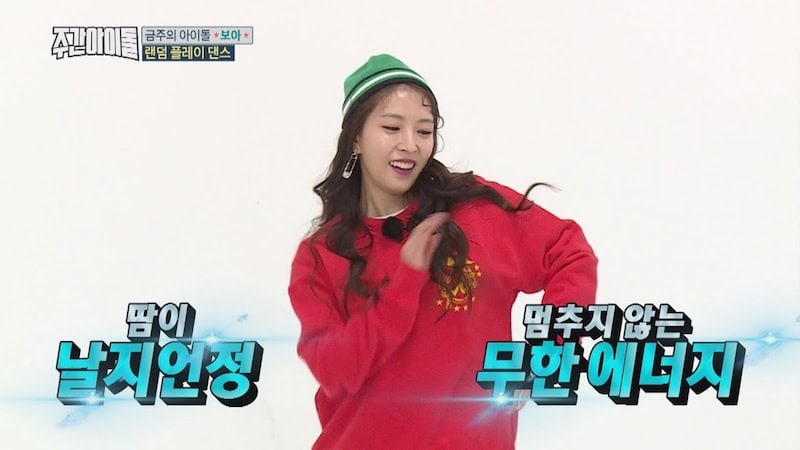 BoA demonstrated why she is known as “Asia’s star”!

Jung Hyung Don and Defconn revealed that they had prepared a special reward just for BoA—freshly sliced raw flatfish. They explained that if she could complete the challenge in three tries, she would be able to eat her prize. As a Japanese chef prepared the sashimi right in front of her, the singer began her attempt at Random Play Dance.

Starting off with her newest title track, “NEGA DOLA,” BoA easily remembered the choreographies of “ID; Peace B,” “Valenti,” “My Name,” “No. 1,” and “Sara.” The MCs couldn’t hold back their amazement as they watched on. However, when “Listen to My Heart” began to play, she took a few seconds longer to remember the choreography and paused her movements entirely. While the singer correctly danced it a few moments later, she did so after the music had already stopped and failed her first attempt.

Defconn joked, “That’s good. We were worried that you might succeed too quickly,” while Jung Hyung Don added, “You had the fastest reaction time out of all the people who’ve tried this up until now.” BoA shared she was also surprised, saying, “I really didn’t prepare for this.” 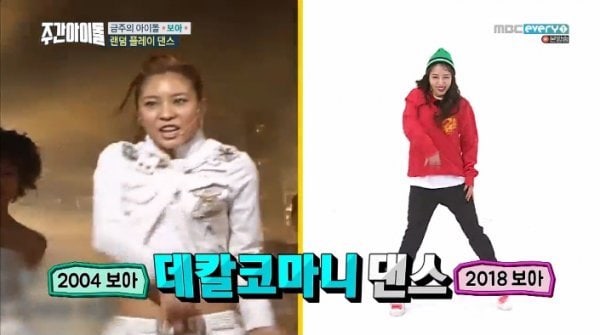 Determined to eat her favorite food, BoA continued on with her second attempt. This time, she successfully danced to “Listen to My Heart,” in addition to “Amazing Kiss,” “Moto,” “Eat You Up,” and “Only One.” While she freestyled a part of “ID; Peace B” the second time it played, the idol finished with one more dance to “NEGA DOLA.”

Completing the dance challenge in just two tries, BoA commented, “Why is this so hard?” Jung Hyung Don kept on complimenting her, saying, “We really were amazed at your reaction time. It’s really impressive.” BoA explained how during her debut years, she had to practice to the point that she would be able to dance right away to music if suddenly woken up.

Check out a part of her impressive Random Play Dance below!

BoA
Weekly Idol
How does this article make you feel?