On the February 2 episode of tvN’s “Youn’s Kitchen,” the staff experienced their busiest day yet.

Within one hour of opening they almost had a full house, filling up all the tables outside as well as two inside. The orders were so numerous, including refill orders, that Park Seo Joon and Lee Seo Jin were unable to confer with one another. This meant that the orders occasionally got mixed up, with some tables getting the wrong order or their food late. 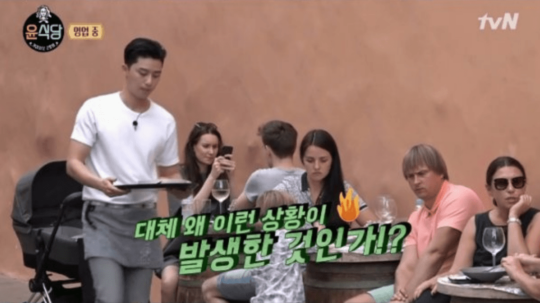 Nonetheless, the restaurant continued to be flooded with customers, including the first order of their new menu, L.A. ribs, and in the end the staff learned that they had made over 200 euros (about $250), their largest volume of sales to date.

Good news was also to come in the ratings for this episode, which recorded a national average of 16 percent and an all-time high of 19.4 percent. This is breaking their record from last week, and once again setting a new record for ratings for a tvN variety show.

The viewership ratings were collected from various paid platforms such as cable, satellite, and IPTV. The show took first place among the other shows airing in its time slot, including those on public broadcasting stations, and achieved a 10.7 percent average rating and 12.7 all-time high rating in the target age group of 20-49 year-olds. Its viewership ratings in the metropolitan area were 18.7 percent (average) and 22.5 percent (all-time high).