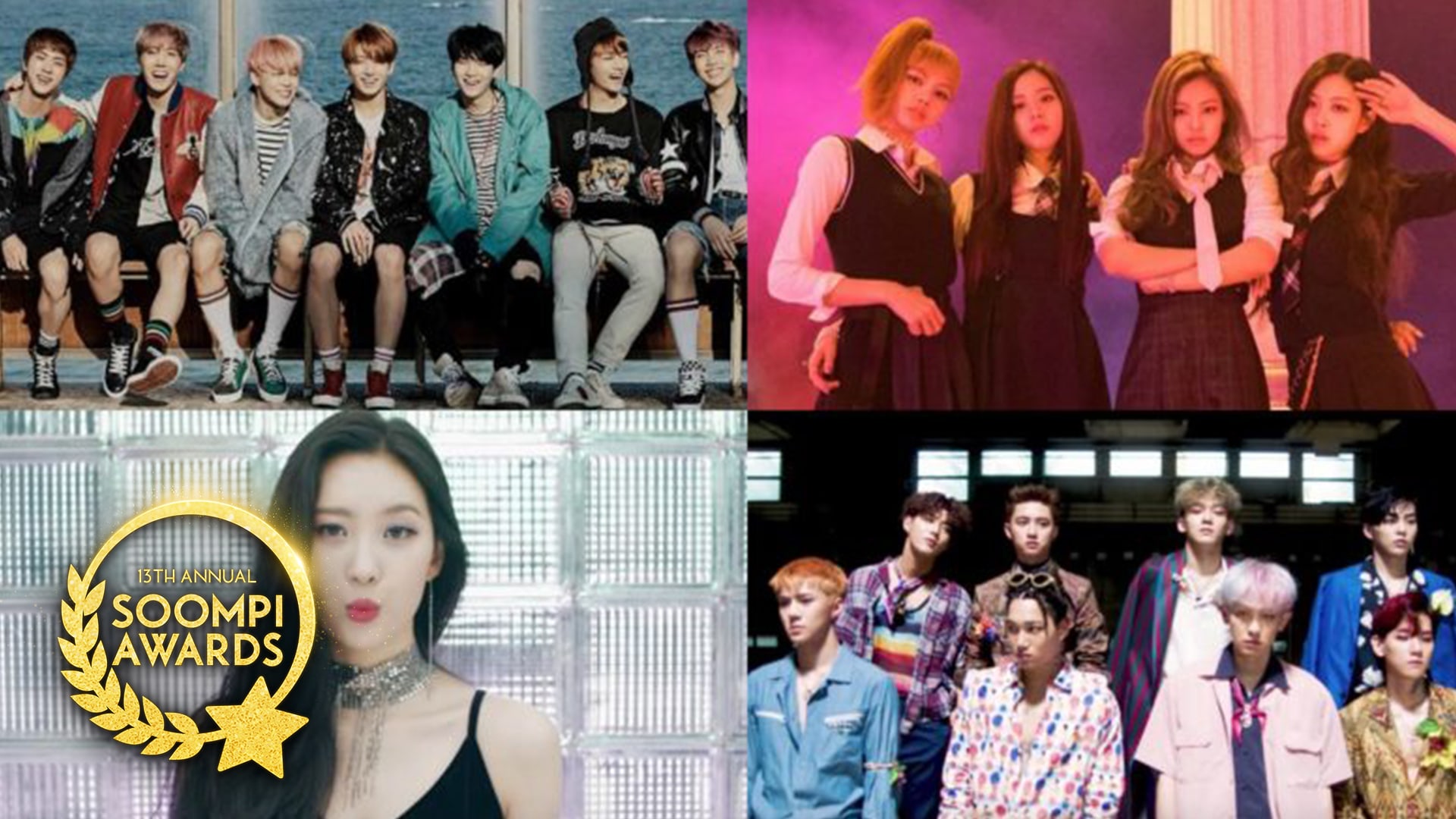 One of the things we love most about K-pop is its versatility: no matter what kind of mood we’re in, there are K-pop songs that speak to what we’re feeling. They comfort us when we’re down, pump us up when we’re hyped, and give us the strength to carry on when times are tough. For the 13th Annual Soompi Awards’ Song of the Year category, we’ve nominated a list of top-notch songs that left their mark on us through the ups and downs of 2017. From wistful ballads to lit dance tracks, these songs delivered just the mood we needed, no matter what the occasion. Read up on the songs and their unique vibes below!

Tired of cold, dreary winter? Let “Red Flavor” instantly transport you back to summer with an upbeat, fresh sound that recalls the feelings of the season: sweet fruit juices, warm breezes, and heart-fluttering summer romances. With an infectious beat and catchy chorus, “Red Flavor” is a summer classic that we’ll be listening to for a long time to come.

Dance party anthem: BLACKPINK — “As If It’s Your Last”

If you need the perfect song to get you pumped for a night out, then look no further than BLACKPINK’s “As If It’s Your Last.” This funky electro-pop banger will make you want to dance the night away to its heart-pounding, all-or-nothing beat!

Wanna One’s debut single is called “Energetic” for a reason: this song will infuse you with energy as it magnetically pulls you from its piano intro through dynamic raps to a rhythmic chorus. It’s the kind of song that you feel in your body, making it the perfect pump-up track for any occasion.

From its laid-back beat to its addictive chorus, “REALLY REALLY” has a breezy tropical house feel that will instantly boost your mood and put a smile on your face. Exciting without being too hype, this versatile song is perfect to dance to or just for casual listening. The track marks WINNER’s first comeback as a group of four, and we can safely say that they slayed it!

Whenever you’re feeling alone or lost in life, BTS’s “Spring Day” is here to offer you comfort. The song is at once nostalgic and uplifting; its wistful melody reflects on loss and yearning as a part of growing up, but it delivers a hopeful message about the promise of new beginnings to come. With expressive lyrics and a particularly resonant bridge, “Spring Day” never fails to strike a meaningful note.

IU’s “Palette” also deals with the theme of maturing, taking a reassuring tone with its casual feel and lyrics that are personal yet easy to identify with. Composed and co-written by IU herself, the song is an intimate reflection of the singer’s uncertainty and doubts as she transitions from youth into adulthood, with an affirmation of self-confidence following G-Dragon’s encouraging rap.

Whether you want a good cry or just a pensive song for a rainy day, “You, Clouds, Rain” is a soulful jazz number that is nostalgic without being outright sad. The track pairs Heize’s rich sound with Shin Yong Jae’s smooth vocals as they reminisce about a bygone love.

If you’re in need of a burst of energy, listen to TWICE’s “SIGNAL” for a dose of youthful cheer. Written by JYP himself, the song is undeniably catchy and will without a doubt get stuck in your head — but its peppiness is so refreshing and rejuvenating that you won’t mind!

It’s a rare song that has the power to palpably pull at our heartstrings, but “Untitled, 2014” manages to do just that, with G-Dragon offering an unusually personal glimpse into his vulnerable side as he longs for a past love. The ballad is stunning for its simplicity, layering G-Dragon’s raw vocals over piano melodies for a stripped-down, laid-bare effect.

Confidence boost: MAMAMOO — “Yes I Am”

The ladies of MAMAMOO are charismatic and fabulous, and this year they blessed us with “Yes I Am,” a bubbly pop track that lends us some of their self-confidence with each listen. The girls embrace their individual uniqueness in the lyrics while still living up to their reputation as vocal powerhouses, to make for a song that will remind you to be unapologetically yourself, and to own it.

EXO brought the heat this summer with “Ko Ko Bop,” a unique blend of reggae beats and electronic sounds with a distinctly sexy vibe. The track is laden with swag from its raps to its dance breaks, making it the perfect song to listen to whenever you’re craving the sultry humidity of summer.

Legendary group BIGBANG released “FXXK IT” as one of their final singles before they take a hiatus for military service. A quirky pop track with a infectiously laid-back beat, the song is a reminder not to take life too seriously: the lyrics shrug at the transient nature of romantic excitement, as the song flits from its playful raps and verses to flirty chorus.

“Gashina” marks Sunmi’s first release as a full-fledged solo artist, and its memorable vocal lines and addictive instrumental riffs did not disappoint. While primarily a reaffirmation of confidence following a breakup, the song is also an inspiring anthem about the power of liberating yourself from old relationships, worries, or insecurities, and moving forward with renewed self-assurance.

KARD’s trademark tropical house sound is at its best in “Don’t Recall,” a breakup song with a mesmerizing instrumental hook. The group utilizes its co-ed lineup to tell the story of a relationship’s fallout from both points of view. This song will resonate if you’ve ever experienced the confusion of trying to forget and move on; it simultaneously captures the melancholy pain that accompanies this type of loss, along with the certainty that it is for the best.

“Plz Don’t Be Sad” is Highlight’s debut single as a newly rebranded group within their own independent entertainment company. After facing their share of struggles and uncertainty in 2017, they reassure fans with the sweetly encouraging lyrics in this bubbly track. Whenever you need a reminder to be happy and put a smile on, let the guys of Highlight reassure you with this uplifting song!

What was your favorite song of 2017? Let us know in the comments!

Check out the nominees for Song of the Year in the 13th Annual Soompi Awards below (presented by MONSTA X’s Jooheon and Minhyuk), and don’t forget to vote!