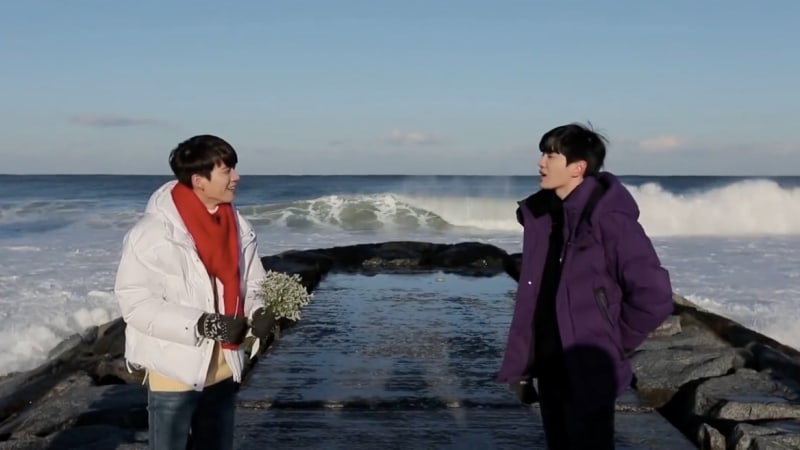 INFINITE’s Woohyun and Sungjong parodied a famous scene from “Goblin” on the latest episode of KBS2’s “Battle Trip.”

Woohyun and Sungjong guested on the February 3 episode of the show as part of the “Pyeongchang Olympic Special: Gangwon Province Winter Trip” special, alongside SEVENTEEN’s Seungkwan and Mingyu.

The INFINITE members traveled to the Youngjin Beach in Gangneung, a famous filming location for the tvN drama “Goblin.”

Although Woohyun and Sungjong were surprised at the ocean’s strong waves, they moved forward with their parody nonetheless. Woohyun donned a red scarf and held a candle to transform into the female lead Ji Eun Tak (originally played by Kim Go Eun), while Sungjong held a bouquet of flowers for his role as the goblin (originally played by Gong Yoo).

Sungjong then stiffly recited the drama’s iconic line: “The weather was nice, so everything else was nice.” Woohyun laughed as he commented, “It’s because Sungjong likes reading books.”

Woohyun, who couldn’t stop laughing at Sungjong’s stiff acting, finally threw the flowers and said, “Go.” Afterwards, Sungjong worried, “Doesn’t this seem like it’ll end up an embarrassing memory for us?”

Watch their hilarious parody below!

Nam Woohyun
Battle Trip
INFINITE
SungJong
How does this article make you feel?