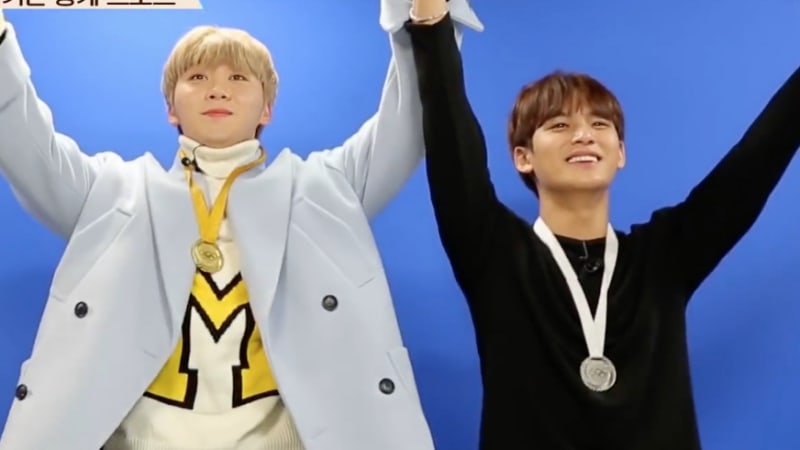 SEVENTEEN’s Seungkwan and Mingyu tried out bobsledding and snowboarding on the latest episode of “Battle Trip.”

The February 3 episode of KBS2’s “Battle Trip” featured a “Pyeongchang Olympic Special: Gangwon Province Winter Trip” to introduce Gangneung and Pyeongchang, where the 2018 Winter Olympics will be held. SEVENTEEN’s Seungkwan and Mingyu appeared as guests for the episode, along with INFINITE’s Woohyun and Sungjong.

During their trip, Seungkwan and Mingyu visited a place where they could experience Winter Olympic sports through virtual reality (VR). The SEVENTEEN members first tried their hand at snowboarding, competing in a virtual race against one another. Seungkwan and Mingyu were both amazed at the quality of the VR experience, which was even complete with commentary by sportscasters. Seungkwan ended up winning the snowboard race, with Mingyu coming in at a close second.

Seungkwan and Mingyu then teamed up to participate in a bobsledding race through virtual reality. The two climbed into an actual bobsled, with Seungkwan going first and taking the reins at the front of the bobsled. After the first run, the two then switched positions, with Mingyu steering the bobsled from the front seat. However, Mingyu ended up making a mistake towards the end of his run, and the two were unable to complete the race.

In the end, Seungkwan earned a gold medal, while Mingyu got a silver medal. Seungkwan and Mingyu made sure to complete their Winter Olympics experience by holding their own medal ceremony.

Watch Seungkwan and Mingyu’s full Winter Olympics experience in the two clips below!

SEVENTEEN
Mingyu
Seungkwan
Battle Trip
How does this article make you feel?