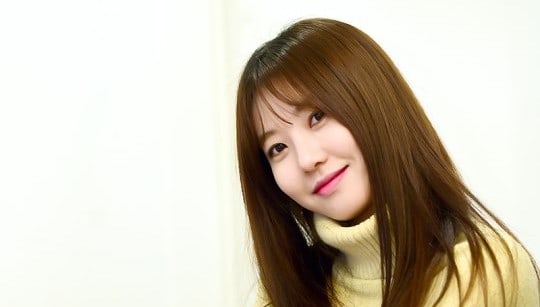 Former BESTie member Dahye, who debuted with the 4-member girl group in 2013, left the group and her agency after terminating her contract last September.

In a recent interview, Dahye gave an update on her situation and explained why she chose to leave the group.

“I’m still looking for an agency,” she shared. “While I’m on hiatus, I post a lot on Instagram and think a lot about my future path. I’m still practicing singing and dancing and I’m exercising a lot with yoga.”

About her decision to leave the group, she said, “I think I had a lot of thoughts as BESTie’s hiatus kept getting longer. I took these various thoughts to the agency to have a sincere talk, and they also told me to look for my dream. The contract was terminated and I was really grateful that they understood me.”

She said later, “When I first came out of the agency, I told myself, ‘Look at the big picture.’ I made up my mind to do that, but I found out that I was afraid of being forgotten. That’s why I promote myself a lot on social media. I feel bad for our fans so I want to work harder. I thought the best I could do was let them know what I was doing, and I’m grateful that they responded so well.”

She added, “I don’t have any regrets [about being in a girl group]. I’m still really grateful. My first dreams were to be in a girl group and to debut, and I’ve achieved those dreams. My mom always says that too. ‘Be happy that you were able to achieve your dream by debuting and got this far. We should be grateful that there are people who like you. Now it’s okay to choose a new life, and think without pressure about what you want to do.’ There are a lot of hardships in being a girl group member but if I was born again, I think I’d want to do it again.”

Although Dahye debuted as a rapper for BESTie, her dream is to be a solo singer. “I liked singing more than dancing, but my position just ended up as rapper. I’m practicing singing and I post a lot of covers [on social media]. When BESTie was active, the industry wasn’t at a point where solo artists could promote as freely as they do now. I look at Sunmi, Suzy, and Chungha, who are making a name for themselves out there. I want to work hard and show my talent on stage.”

BESTie
XPN
Dahye (BESTie)
How does this article make you feel?