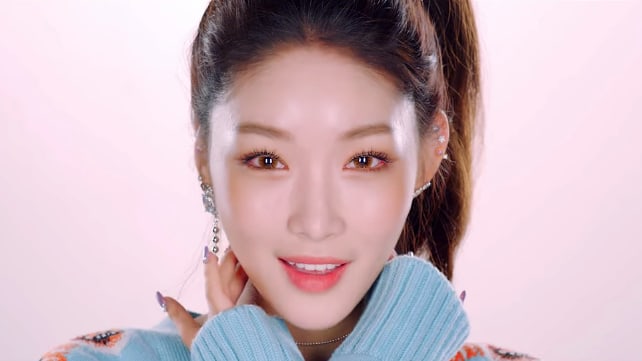 There are lots of changes on our chart this week, with the top three songs all coming from outside of last week’s top 10!

Chungha scores her first ever No. 1 song on our chart with “Roller Coaster”! This song debuted at No. 16 last week and surprisingly leapfrogged many challengers to become our new No. 1 song this week. “Roller Coaster” has not yet won on any music shows but thanks to a strong showing on our own Soompi Airplay, it was able to land on the top spot this week. Congratulations to Chungha!

“Roller Coaster” is the title song of Chungha’s second mini-album “Offset.” It is a dance song that’s reminiscent of ’90s style music but with a modern two-step rhythm. The lyrics describe the thrills of being in love as feeling similarly to riding a roller coaster.

Moving up 13 spots to No. 2 is Sunmi’s “Heroine.” This song won on “Inkigayo,” “Music Core,” and “M! Countdown” last week and was thought to be the favorite to top our chart this week. However, it did not score well on our Soompi Airplay and has settled for second place. “Heroine” is a retro style dance track with a piano rhythm and a dreamy melody. Sunmi’s enticing vocals and charisma is displayed throughout this song, which is a prequel to her last hit song “Gashina.”

Moving up 17 spots to score their first ever top three hit is JBJ’s “My Flower.” This is the title song of JBJ’s second mini-album “True Colors.” Hitmaker Duble Sidekick wrote this new concept pop song and they penned the lyrics together with JBJ members Kim Sang Kyun and Kwon Hyun Bin. The song tells the story of JBJ, who was able to bloom thanks to their fans. “My Flower” won on “Music Bank” last week and was JBJ’s first win on a music show.

We have one more new song in the top 10 this week! Moving up four spots to score their first top 10 hit is MOMOLAND’s “Bboom Bboom.” This song was released a month ago but is gaining popularity recently, which a rarity for idol artists. “Bboom Bboom” is the title song of MOMOLAND’s third mini-album “GREAT!” It is a dance song with a house beat and witty lyrics about showing all your charms so that your crush will like you.