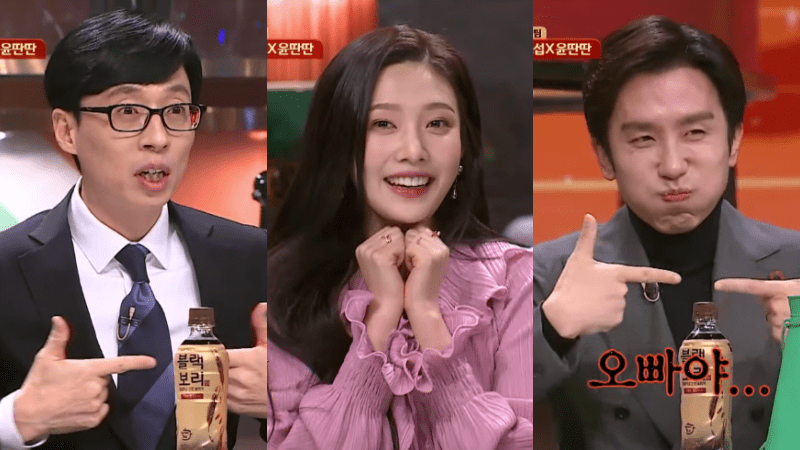 On the February 4 episode of JTBC’s “Sugar Man 2,” Yoo Jae Suk and Yoo Hee Yeol had to conquer an unexpected challenge: acting cute.

Indie duo SEENROOT was one of the guests during this broadcast, along with Yoon Ddan Ddan, and Highlight’s Yang Yoseob.

At Joy’s questioning, SEENROOT explained how their song “Sweet Heart” (more commonly known by its Korean title “Oppaya”) was popular among students since so many idols had acted cute to the melody of the song. This aegyo trend was often seen not only on shows like “Weekly Idol,” but also on social media.

Joy then suddenly suggested that the other hosts should try it as well. After watching the Red Velvet member’s demonstration, Yoo Jae Suk commented, “I’m sorry, but you’re saying that we should—, this—, right now?”

Before they attempted it themselves, Yoo Jae Suk promoted Yang Yoseob to show off his version, as well as fellow host Park Na Rae. Unable to avoid it anymore, Yoo Jae Suk and Yoo Hee Yeol were the last to go. As SEENROOT’s Shin Hyun Hee sang, they acted as cute as they could, to the shock of the audience.

See their hilarious attempts below!