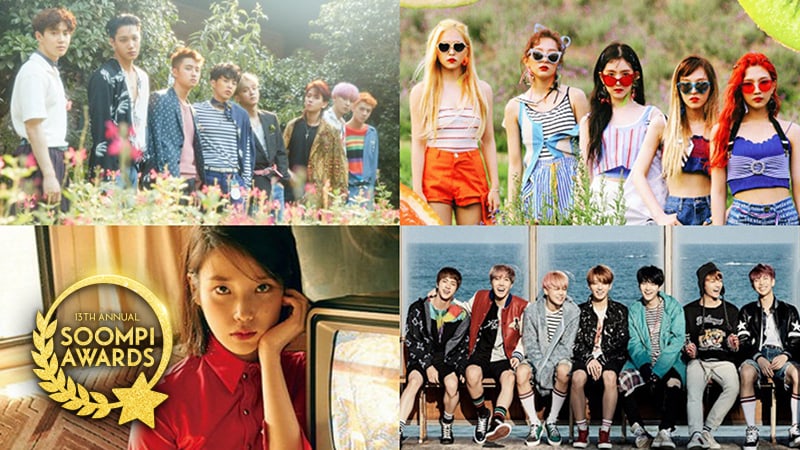 15 Greatest Highlights From The Best Albums Of 2017

2017 was a year filled with high-quality albums of our favorite K-pop artists. Powerful beats, catchy choruses, smart lyrics, ballads with heartfelt messages — it was easy to fall in love with these works of art. No wonder these albums topped charts everywhere and became fan favorites in no time. If you haven’t had the opportunity to catch up with every artist, it’s time to give a listen to some of the greatest B-sides of these masterpieces.

The three slash signs on Heize’s “///” represents “You,” “Clouds,” and “Rain,” and the album is full of smooth tunes perfect for any rainy day. “Dark Clouds” is an excellent combination of jazzy R&B sounds, smart metaphors, and smooth verses from both Heize and rapper nafla, and it’s something we all need after a break up.

“The Red Summer” was everything we wanted from a summer release: a bright and colorful concept with upbeat songs and intensely catchy melodies. With animal voices incorporated in the song, “Zoo” is definitely the most playful track on the album, and we can’t get enough of the tropical vibes the five girls offer!

“MADE,” BIGBANG’s latest release, is also their last for a while, but it’s impossible to get bored of these songs! “Girlfriend” is everything we love in BIGBANG’s music; it fuses pop and hip hop perfectly and gives us just the right amount of retro vibes. The lyrics are very sweet, and the melody sticks in your head after the first listen.

“The War” indicates just how much EXO improved musically in the last few years, and every song feels like a true highlight on this album. “What U Do?” is the perfect summer jam; the upbeat chorus is an instant catch, and the tropical beat is supported perfectly with the electronic melodies. And as always, EXO’s vocalists stayed true to themselves and proved again why we love their voices so much.

Every track on IU’s latest release “Palette” is a jewel in and of itself, but IU’s duet with Oh Hyuk is truly something extraordinary; IU’s sweetness blends with Oh Hyuk’s husky voice without a flaw. Although the lyrics are heart-wrenching, the soft melody of the song can calm you any day.

The debut album of the winners from “Produce 101 Season 2” was an instant success, and every track from “1×1=1 (TO BE ONE)” became a hit in no time. The choreography and even the lyrics of “Wanna Be (My Baby)” are filled with inside jokes among Wanna One members and their fans (Park Ji Hoon’s “jeojang” will probably never die), and that’s what makes the song the cutest gift for “Wannables.”

The repackage album of “Wings” tells us stories we haven’t heard from the seven boys yet. The BTS members showcase their talent on “A Supplementary Story: You Never Walk Alone,” and the lyrics are here to comfort us all and send us a clear message: we are never alone in our lives.

If you’ve ever been bullied for your looks, you can relate to the lyrics of “Play Ugly” without a doubt. The song is on Akdong Musician’s “Winter” album, and it’s clear the message goes out to all the haters and bullies of the world: the hateful comments always hurt and leave a mark!

We just simply can’t get enough of Highlight’s beautiful vocals, so it was refreshing to hear their voices again on their repackage album titled “Calling You.” “Sleep Tight” is an enchanting ballad and it’s exactly why we love Highlight so much: the lyrics are painful yet delicate, the melody is captivating, and the boys always deliver fantastic vocal performances.

PSY’s never been afraid to release experimental tracks, and “Rock Will Never Die” is an interesting twist of rock and electronic music on his latest album, “4X2=8.” PSY’s usual dance-pop music is blending well with the sound of the electronic guitar, and the singer finally had a chance to show a tribute to his love for rock music.

GFRIEND’s “Parallel” album demonstrated amazingly just why we adore these six girls, and they didn’t hesitate to show us their greatest strengths: catchy melodies, powerful choreographies, and strong vocals. “Ave Maria” is a perfect example. The synths in the background put just enough retro twist to it.

Although “Super Star” from G-Dragon’s solo album “Kwon Ji Yong” sounds like the ultimate groovy slow-jam with a catchy chorus easy to sing along to, the lyrics actually hit home. The artist’s inner feelings, and his sadness and loneliness are easy to notice in the lyrics, and we can’t help but feel empathy towards him.

A sultry beat with sweet R&B melody is not exactly what we first expect from a TWICE song, but that’s what makes “Melting” on their “TWICEcoaster: Lane 2” album a real standout. It’s the main vocalists’ time to shine, and their performance is undeniably strong.

Being the most energetic and upbeat track on their “Purple” album, MAMAMOO’s “Finally” has the ability to grab your attention with its funky beat and sweet harmonies. The high note at the end is a real blessing to our ears, and these girls with the powerhouse vocals didn’t let us down this time either.

A blast of energy from Zico, Dean, Crush, and Penomeco? That’s exactly what we needed, and “Fanxy Child” from Zico’s latest solo album “Television” delivers flawlessly. We expected a true bop from these four, and we just got it in the form of “Fanxy Child.” The lyrics are worth reading, too!

What were your favorite B-sides from the best K-pop albums of 2017? Tell us in the comments below!

Check out the nominees for Album of the Year in the 13th Annual Soompi Awards below (introduced by MONSTA X’s Shownu and Hyungwon), and don’t forget to vote!

fanniberger thinks 2017 was full of superb albums from all of her favorite artists so she’s cheering them for all and wishes for many-many more amazing K-pop songs in 2018, too. Say hi to her on Twitter and Instagram!