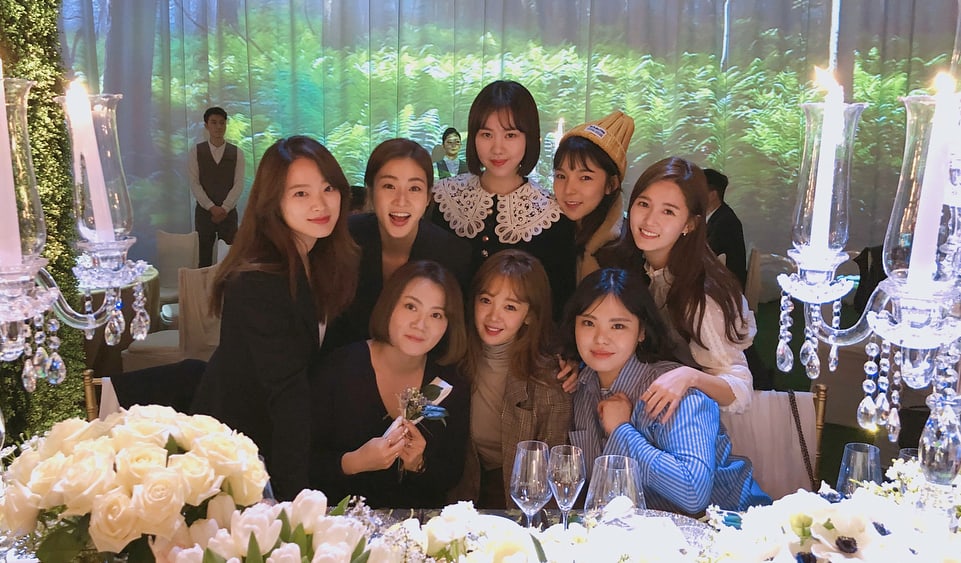 The cast members of “Sunny” recently gathered together at co-star Min Hyo Rin’s wedding to BIGBANG’s Taeyang on February 3.

The film “Sunny” was released in 2011, and the actresses from the cast have been known to maintain a close friendship for the past seven years. The cast members uploaded several photos from Min Hyo Rin’s wedding to their personal social media accounts, proving their long-standing friendship.

Kang Sora uploaded a photo from the wedding with the simple hashtags “happywedding” and “sunny.”

Kim Bo Mi uploaded two photos, with the caption, “Congrats on your wedding Hyo Rin. Guys, let’s get married one by one.”

Kim Min Young also uploaded photos of the cast from the party. She wrote, “We met at the beginning of our 20s, but the front number has already changed. The day our oldest sister is getting married. Hyo Rin, all I can say is you looked like a doll. Our brother-in-law is Taeyang. All my love and blessings to the very lovely couple. Let’s all find our own Taeyang as well. So who’s next in line?”

The rest of the cast uploaded the same photos to their Instagram accounts.

Kim Ye Won wrote, “A truly beautiful wedding. Everything was beautiful. I sincerely bless and cheer on the two, who were more beautiful than anybody else, with all of my heart. Also, those of us who gathered together were beautiful as well.”

Nam Bo Ra’s caption read, “At the wedding of Hyo Rin, who’s usually pretty but was especially pretty this day. Congratulations!” She added the hashtags “Who’s next in line?” and “The day the oldest sister got married.”

Chun Woo Hee’s caption stated, “Hyo Rin, congrats on your marriage, be happy. A beautiful time for two lovely people. A fun time with the ‘Sunny’ cast for the first time in awhile, thanks to [you two].”

Congratulations once again to the couple!