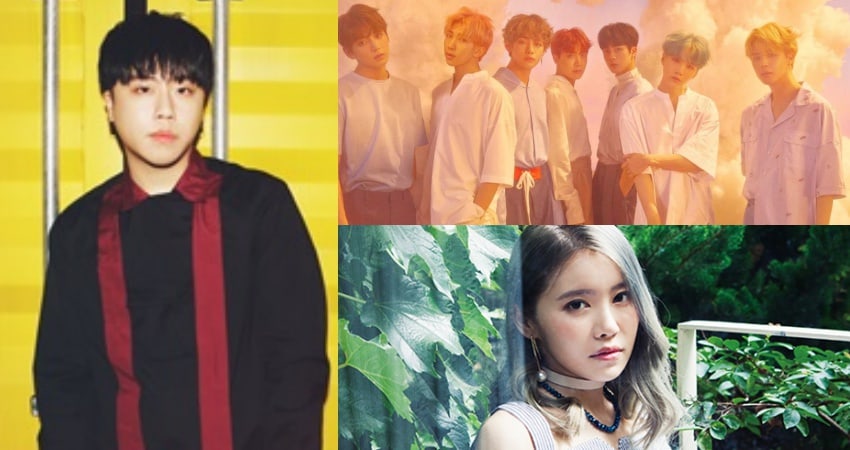 Planetarium Records held a showcase on February 7 to celebrate the release of “Planetarium Case #2.” Main producer Kei.G, “K-pop Star 5” contestant Jung Jin Woo, Gaho, Moti, Villain, and June were there to show off their talents.

June especially drew people’s attention when it was revealed that he had helped write songs like BTS’s “Lost” and “Not Today,” as well as Suran’s “Wine.” When asked how he had gotten to know BTS and Suran, June revealed, “I was actually a trainee at BigHit Entertainment. Bang Shi Hyuk asked if I’d like to try my hand at composing, and I gladly accepted the offer. I eventually got the chance to work with BTS and Suran.”

He also revealed that he and Suga became friends while working on “Wine” and added, “We sometimes share a meal together or go out for drinks, and we keep in contact with each other. He sent me a message congratulating me on the release of my debut album, and said that he’d like to work with me on another song if we get the chance. It would be an honor to work with him again, this time as a fellow singer.”

June made his debut as a singer in January 2018 with the release of “Planetarium Case #1.” “Planetarium Case #2” is a continuation of the first album and was released at noon KST on February 7. It contains a total of ten tracks, including solo tracks from each musician.

BTS
Suga
Suran
Planetarium Records
June
How does this article make you feel?