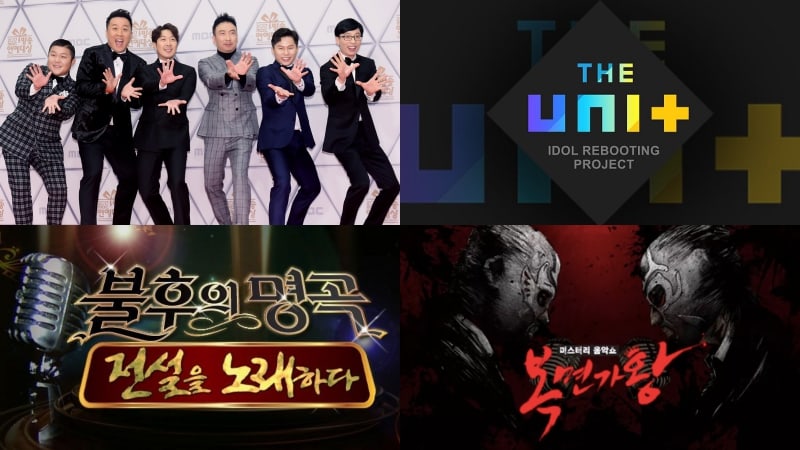 With the 2018 PyeongChang Winter Olympics officially starting on February 9, there will be some changes coming up to the regular television schedule over the next few days.

Many popular shows will be affected as the major three networks (MBC, KBS, and SBS) air the events from South Korea’s first Olympic games in 30 years.

KBS 2TV’s “Music Bank” will not be airing its usual weekly episode on Friday. The show is also off the air next week, with no episode scheduled for February 16.

MBC’s “Insolent Housemates” and “Ranking Show 1, 2, 3” will not be airing that evening as the network broadcasts the Olympic opening ceremonies.

Mnet will not air a new episode of “I Can See Your Voice” on February 9. A source from the network has stated, “The schedule has been changed as we want to encourage people to all support the PyeongChang Olympics together.”

MBC’s “Infinite Challenge” won’t broadcast a new episode this week, with the much-anticipated H.O.T reunion scheduled to begin next week on February 17. The special will be airing over two weeks, with the second episode on February 24.

MBC’s Saturday music show “Music Core” will also be off the air this week. “All Broadcasts of the World” will air from 3:30 p.m. KST to 6:30 p.m. KST after not showing a new episode last weekend.

KBS drama “My Golden Life” will not air a new episode on February 10.

KBS 2TV’s “Battle Trip” and “Yoo Hee Yeol’s Sketchbook” will also not broadcast new episodes this weekend. In addition, SBS will not be airing its usual Saturday show “Jagiya” on February 10.

Sunday programming will also be affected on the three major networks. Shows including KBS 2TV’s “The Return of Superman,” MBC’s “Wizard of Nowhere,” SBS’s “Inkigayo,” and SBS’s “Running Man” will all be off the air this weekend.

MBC’s “King of Masked Singer” will air later than normal at 6:15 p.m. KST on February 11, which is the usual time slot for “Wizard of Nowhere.”

“Man Who Sets the Table” will air episode 43 on February 11, with episode 44 not broadcast that day.

I Can See Your Voice
The Return of Superman
Battle Trip
Music Core
Running Man
Yoo Hee Yeol's Sketchbook
Inkigayo
M!Countdown
Infinite Challenge
Immortal Songs
Insolent Housemates
XPN
All Broadcasts of the World
The Unit
Man Who Sets the Table
My Golden Life
Wizard of Nowhere
The King of Mask Singer
How does this article make you feel?