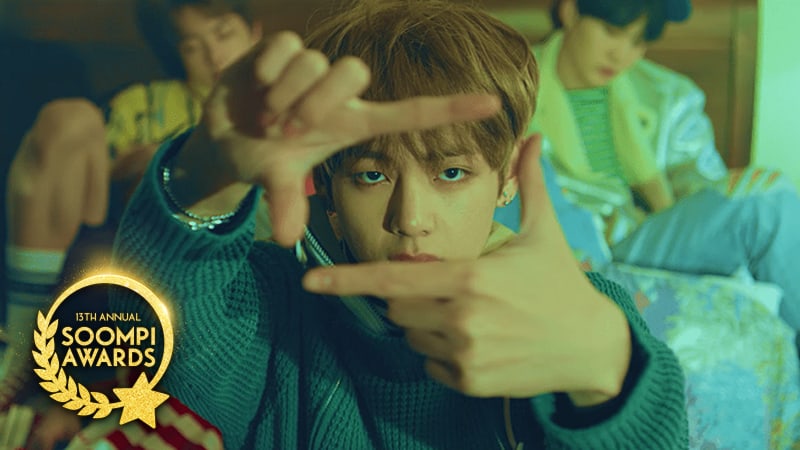 15 Memorable MV Moments From 2017 That Left Us Completely Shook

When considering K-pop as a genre, music videos are an essential part of the experience. And 2017 certainly kept us well-fed in terms of MV content, seeing how comebacks are happening more often than ever before. Such a plethora of quality videos should be celebrated, and celebrate we shall! Read ahead to discover which moments from 2017 music videos were just too memorable to let go of.

Red Velvet treated us well in 2017, especially when they came out with “Peek A Boo” in November. In the music video, the members got in touch with their alluring sides as they played around with a pizza delivery boy. The dark concept suited them well, and Joy in particular made a strong impression with her sexiness. See below to see what I mean.

Though SEVENTEEN isn’t known for being sexy, “Clap” did have some heart-stopping moments strewn throughout. Between the theatrical scenes and the powerful dance, there’s no room to breathe while watching this MV.

With its superhero theme, the “Power” music video is fun and dynamic to watch. Seeing the EXO members with superpowers again is always a good time, but I had to choose this moment of Baekhyun as the most memorable. I mean, do I even need an explanation?

The premise of the “365 Fresh” music video is very plot-driven, depicting the adventures of the three main characters. Though it is on the mature side, the rawness of each moment is part of the appeal. This particular scene of HyunA and E’Dawn had me shook, as it’s rare to portray relationships of this nature between members.

To be honest, this whole MV shocked me for various reasons. The horror concept is done incredibly well, complementing DreamCatcher’s rock-esque sound. In fact, I knew these girls were for real when I saw this scene of them performing a ritual of sorts. It definitely gave me the creeps, but in a good way.

One thing that stands out about “Spring Day” is just how darn beautiful the music video looks. The cinematography is absolutely unreal and has inspired many aesthetic edits. Somehow every scene inspires a sense of nostalgia that fits perfectly with the song’s lyrics.

The compelling story of the “Dramarama” music video is super intricate, too much so to explain here in its entirety. But take my word for it when I say that the MV is almost like a mini movie. With such good acting performances from the members, it’s no surprise that you can get drawn in so quickly.

As expected with B.A.P, they never hesitate to discuss important issues in their songs. “Wake Me Up” uses actors to depict the gritty side of mental health, with shots of the members filling the gaps. This quick scene of Zelo spinning caught my eye just because of the grace in his technique.

As the title implies, the music video for “Movie” is theatrical as can be. The members all dress up as different movie characters while acting out various scenes, and hilarity ensues. To be honest, I was as shook watching the “Movie” MV as BTOB looks in this GIF.

If you love bright and cheerful music videos, “Yesterday” is the one to watch. Literally you can’t be in a bad mood while listening to this song. The members’ various close-ups are the highlight, as their animated expressions are always adorable.

Everything about this music video is just so gorgeous. The traditional fans incorporated with the flowing outfits are so unlike any modern concept that I’ve seen, at least when it comes to idols. Whenever VIXX does any sort of fan trick, the beauty of it is almost too much to handle.

If an award for most artsy music video existed, it would have to go to “Palette.” Basically every shot in this MV is gorgeous as hell, making it incredibly gif-able. And the moment IU started dancing, that’s it. I just died right then.

Let’s be real; every PSY MV is its own wild adventure. Expect the unexpected and prepare to be entertained. The most hilarious parts of “New Face” occur when PSY is trying to woo the female protagonist, played by Naeun of Apink. Needless to say, she’s less than impressed.

The story of this MV is rather unique, since it takes place with the band together on a ship. The entirety of the plot is spent trying to reel in a big catch, which turns out to be none other than Jang Moon Bok. Excluding the song itself, the best part of the music video is shown in the GIF below.

I don’t know how to describe this music video other than that it’s just a lot, yet Sunmi manages to make it amazing. Even as she’s acting wacky beyond belief, her charisma fills the scene instantly. Her expressions are easily the best part of her performances; see exhibit A below.

What’s your favorite music video moment from 2017? Check out the nominees below (introduced by MONSTA X’s Shownu and Kihyun), and make sure to vote for your favorite in the 13th Annual Soompi Awards!