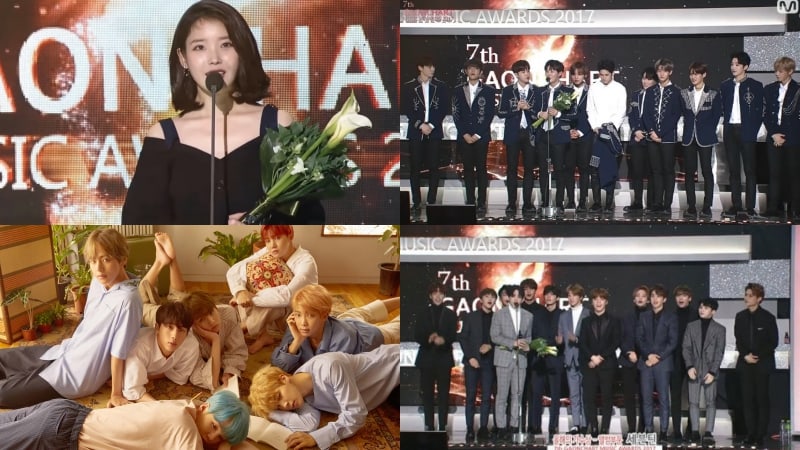 The 7th Gaon Chart Music Awards were held on February 14, celebrating achievements in the music industry in the past year!

The annual award ceremony took place at the Jamsil Arena in Seoul, with many popular K-pop artists receiving awards. It was hosted by Super Junior’s Leeteuk and TWICE’s Dahyun.

In the quarterly physical album category, BTS won both the first quarter award for “You Never Walk Alone” and the third quarter award for “Love Yourself: Her.” They were unfortunately unable to attend due to a prior commitment. The second quarter award went to SEVENTEEN’s “Al1,” and Wanna One’s “1-1=0 (Nothing Without You)” won for the fourth quarter.

IU took home the most awards this evening, as the singer-songwriter won the Artist of the Year award in the monthly digital music category in both March and April, as well as the Long-Run Song of the Year Award and Lyricist of the Year Award. The Fave Entertainment production team behind her album “Palette” also won the Album Producer Award.

3rd Quarter: BTS’s “Love Yourself: Her”

Hot Performance of the Year Award: NU’EST W, GOT7

Lyricist of the Year Award: IU

Composer of the Year Award: Pdogg

New Artist of the Year (Album category) Award: Wanna One