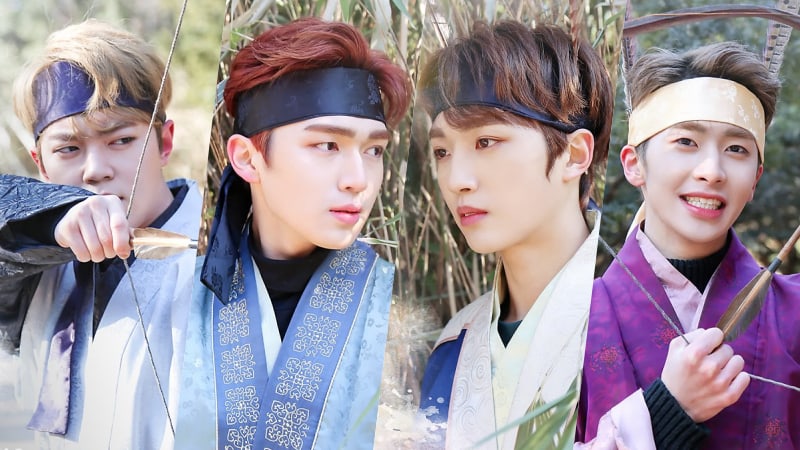 On February 16, UP10TION took home the gold medal in Men’s Archery at the MBC Lunar New Year special. The four members who participated in the event—Sunyoul, Bitto, Gyujin, and Xiao—celebrated their win by sharing a video of themselves as hwarang, the “flower youth” knights that defended the ancient Silla kingdom and were renowned for their archery skills.

The idols clearly put a lot of effort into the video, which features the UP10TION members as hwarang from the Silla kingdom who are magically transported to modern-day Korea. After traveling across time to the present, the idols trade in their ancient bows for their modern counterparts and split into teams to engage in an archery battle against each other.

For some reason, the time-traveling hwarang have quite a bit of trouble keeping modern slang out of their speech. At one point, Sunyoul begins to sing “Pick Me,” the theme song from “Produce 101 Season 2,” leading Bitto to comment, “I’ve heard that melody somewhere before.”

Although the first round of competition results in a tie, Sunyoul and Bitto’s team ultimately claims victory, and the four hwarang manage to return to Silla, where they wonder if all of it was a dream.

The UP10TION members also posted photos of themselves posing with their hard-won gold medal in their traditional Silla-style hanbok.

Congratulations to UP10TION on their win!

Check out the full clip below:

You can also watch the full “2018 Idol Star Athletics Championships New Year Special,” including the Men’s Archery competition, below!