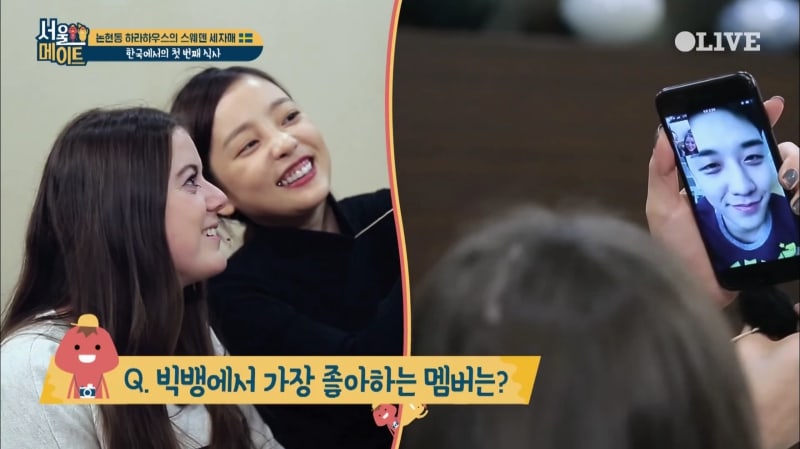 Goo Hara called her friend and BIGBANG member Seungri for one of her guests on Olive TV’s “Seoulmate.”

“Seoulmate” is a variety show where celebrities open their homes to foreigners visiting Korea, and they learn about each other’s cultures and connect with one another by spending time together.

On the February 17 episode, Goo Hara hung out with three sisters from Sweden. She took them to a Korean restaurant that she used to frequent with KARA members in the past.

At the restaurant, Goo Hara asked the siblings what K-pop singers they like and they named BTS and Crush. The oldest sister said, “I like BTS, but I like BIGBANG the most. I went to London once and saw them performing at a concert.”

Goo Hara then called Seungri on her phone, but he said he would call her after he showered. When he called back via video call, she explained to him that she was filming a TV show with foreigners who were big fans of him. 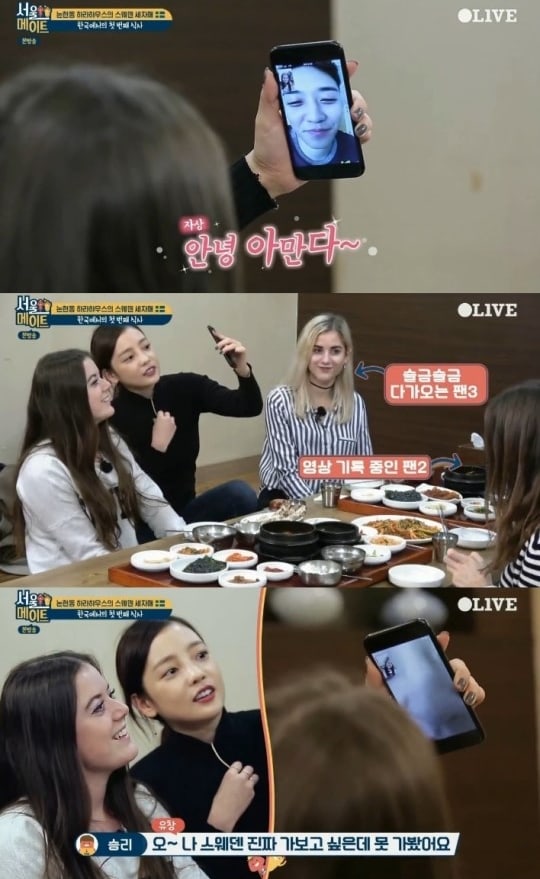 Seungri joked, “Are you sure they like me and not G-Dragon? It’s not easy to like me.” She then introduced him to her guest and the two exchanged greetings.

The BIGBANG member talked about how he wanted to visit Sweden, then asked her about her favorite songs and member. When the guest answered, “You,” he joked, “That’s not true” and thanked her for being a fan. When Goo Hara got back on the phone to thank him, he teased, “Are you living well? You finally contact me now that you’re doing a TV show.”

Afterwards, the guest commented, “I totally fell in love. I was nervous, happy, and became speechless. It was amazing.”

Watch the clip of Seungri talking to a lucky fan below!

BIGBANG
Goo Hara
Seungri
Seoulmate
How does this article make you feel?