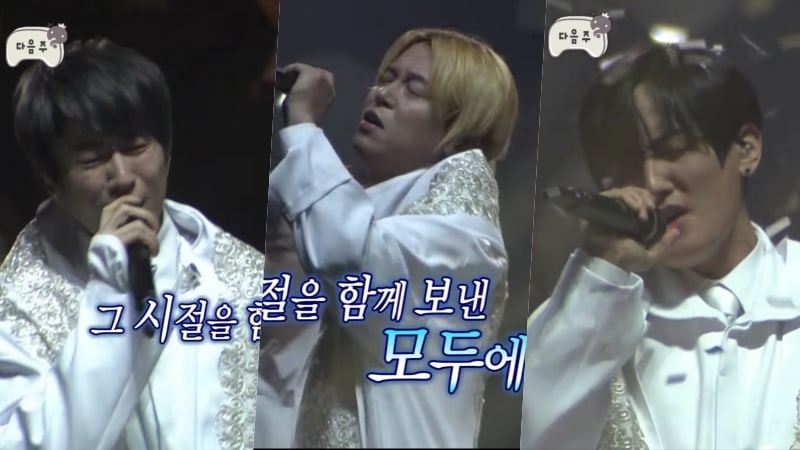 Watch: H.O.T. And Their Fans Finally Reunite After 17 Years In Emotional Preview For “Infinite Challenge”

The kings are back!

MBC’s “Infinite Challenge” has released a preview of next week’s special episode, “ToToGa 3: Return of the Kings H.O.T.,” which shows the group performing on stage in front of their fans for the first time in 17 years.

The teaser shows fans lined up outside of Olympic Stadium, where the reunion performance took place on February 15. Dressed in their signature white raincoats and holding white balloons, H.O.T.’s fans chant in unison and tear up at seeing their idols on stage again.

During H.O.T.’s performance of their song “You and I,” both the members and their fans become emotional and shed tears. The ballad features touching lyrics about the eternal love and memories shared by the group and its fans, and a previously released clip had shown the members rehearsing this song in particular.

At the end of the preview, the “Infinite Challenge” cast members gather to practice their performance of H.O.T.’s classic hit “We Are The Future.” Producing director (PD) Kim Tae Ho explains to them that only five out of the six members will be chosen to perform, and the winners will be revealed on next week’s episode.

The second half of the “Infinite Challenge” H.O.T. special will air on February 24 at 10:40 p.m. KST. In the meantime, watch the preview below!

You can also check out the first half of the special here: