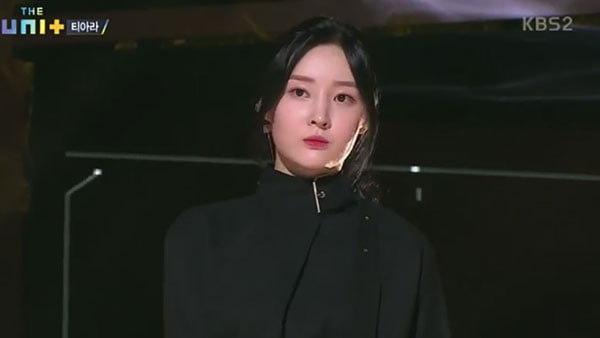 Han Areum Opens Up About Bullying Controversy, Life After Leaving T-ara, And “The Unit”

In a recent interview, former T-ara member Han Areum honestly talked about how her past hardships with T-ara left a scar on her, but also helped her as she grew through her experiences on the idol rebooting show “The Unit.”

Han Areum, who spoke about her past controversies on “The Unit,” once again talked about her departure from T-ara, saying, “I don’t think my members did anything wrong. There are disagreements in every group, but the world put the spotlight on T-ara because of the bullying controversy. We just didn’t communicate enough, and we were careful of each other. I don’t acknowledge that I was bullied nor that they bullied me.”

There was even more criticism about the group as a T-ara staff member revealed the text messages between T-ara member Hwayoung’s twin Hyoyoung and Areum. Concerning that, Han Areum wrote, “Hwayoung truly has a cool personality. She was a person who took good care of me, the new member of the group. I heard that Hwayoung scolded Hyoyoung for sending those text messages to me.”

Han Areum revealed she feels no resentment towards her members. She said, “I was hurt by the staff and people around me rather than my members. They didn’t do anything bad to me, but it was just difficult for me to get along with them. We were all sensitive back then, and I was young, too.” She also added that her one year of promoting as a T-ara member was an opportunity where she learned many things, but on the other hand, she thinks she wouldn’t have been so hurt if she hadn’t been a part of T-ara.

Not only did Han Areum have to deal with a bullying controversy, but she also had to suffer through rumors that she had become possessed. She explained that those rumors came out after she had uploaded a photo of herself face-painting on social media, which made people assume she had lost her mind. Han Areum said, “I was in disbelief. An article about my illness had been published, and my friend called me. I laughed a lot since my friend brought it up. Later on, I was determined to make that moment a turning point in my life.”

Han Areum confessed about the emotional and physical obstacles she suffered through after leaving T-ara. She admitted, “I got a trauma where I couldn’t eat in front of people. I didn’t eat after leaving T-ara, so I lost 40 kilograms. I was locked up in my room. I only listened to music. If not for music, I would have died. My uncle came and asked me to open my door, but I couldn’t. After that, I really like the bathroom. There was a bathroom attached to my room, and it was part of my space. So even to this day, if I’m struggling, I go look in the bathroom mirror.”

Han Areum, who recovered her body and spirit, taught dance in China last year. Then when she came back, she was offered to appear on “The Unit.” Back then, she only had one goal, and it was to show everyone that she was okay now. Through “The Unit,” Han Areum and her past controversies came into light once more, which put her through another difficult phase. Despite that fact, she revealed that she had no regrets about appearing on the idol rebooting show. She stated, “The important thing is that I came out into the world again.”

Currently, Han Areum is preparing a healing photo book. She said, “I really wanted to be comforted, but when I thought about it, comforting someone and hearing them say thank you to me would comfort me. So I’m going to make a book with nature, photos of people’s happy faces, and my writing in it. I would like to freely receive any amount above a fixed price and donate the proceeds to an orphanage.”

T-ara
Han Areum
The Unit
How does this article make you feel?