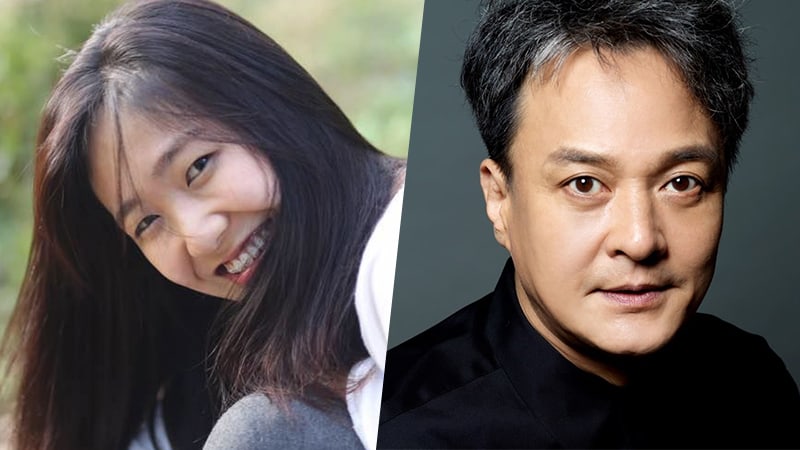 It was revealed yesterday that Jo Min Ki had allegedly sexually harassed his female students while working as a professor at Cheongju University. The university confirmed that the actor underwent investigation for sexual harassment, but Jo Min Ki’s agency denied the reports and claimed that they were just rumors.

The actor further explained that his physical touch towards students was meant for “encouragement,” not molestation.

On February 20 at 11 p.m. KST, however, a theatre actress named Song Ha Neul wrote a post on her personal Facebook account, describing the sexual harassment that Jo Min Ki had inflicted on his students.

Below is the translation of Song Ha Neul’s post:

“I am a rookie actress who recently debuted after graduating in theatre at Cheongju University.

“I tried to forget about the past, but after reading the official statement saying that Jo Min Ki feels wronged, I could no longer hold in my anger. The things that my friends and I, along with many other students, had endured for the past few years are not ‘victimless rumors’ nor ‘fabricated conspiracy theories.’

“I am not a fool that can’t differentiate between encouragement and molestation. The things that my colleagues and I went through were clearly sexual harassment. I was so scared to come forward and I’m still scared right now, but if this controversy quiets down, there will be more victims who will live in fear like I do. That is why I am gathering the courage to write this post.

“In 2013 when I entered college, my seniors warned me to be careful of Professor Jo Min Ki. His sexual harassment was an open secret within our department. But to these theatre students aspiring to be actresses, Professor Jo Min Ki had so much power and no one could complain or report it. He was a ‘king’ on our campus because he was a celebrity and successful actor.

“Professor Jo Min Ki had an officetel near campus. When he came to lecture several times a week, he always called his female students to his officetel at night. These young students couldn’t reject him because he said they would have to discuss ‘acting’ and ‘auditioning.’ So they would go to his officetel and drink with him.

“People always asked us why we couldn’t just say no or avoid the situation, but if we refused to go, he would keep calling us, our seniors, and our friends. We had no choice but to go to his officetel. Because we didn’t want to go alone, we often asked our classmates to go with us. Going with a friend was the only solution.

“When my friend and I went to his officetel, he told us to sleep over. We told him we would just go home, but he insisted until the end and told us to get ready for bed. He even gave us toothbrushes and clothes to change into.

“My friend and I went into the bathroom and didn’t know what to do. We turned on the faucet to make sure he couldn’t hear us talk. We didn’t know how to escape the situation. When we came out of the bathroom, Professor Jo Min Ki forced us onto his bed. We tried to resist but he was so strong.

“He then climbed on top of me and said, ‘This is expensive,’ while putting lotion on my face. I felt so helpless and I couldn’t make any sound because my mind went blank. After that, he laid between me and my friend. He stroked our arms, stared at our faces, and put his hand on our waists. I got chills down my spine every time he did that, but I couldn’t do anything. I curled up and stayed awake, waiting for him to fall asleep. I quieted down my breathing so he wouldn’t wake up. Once the sun began to rise, my friend and I secretly left his officetel and went home. I couldn’t fall asleep that night.

“One time, Professor Jo Min Ki called me over to his officetel, so I went with my boyfriend. Because my boyfriend has a low alcohol tolerance level, he fell asleep first. I was so scared that something would happen, and it felt like no one could help me. Professor Jo Min Ki started talking about my sexual relationship with my boyfriend, asking questions like, ‘What is it like,’ and ‘How often do you guys do it per week.’ I felt so ashamed but I could only force out a laugh.

“Even after this, my seniors and I were called over to his officetel many times. Professor Jo Min Ki kept making us drink, and one of my seniors got so drunk to the point she couldn’t keep herself steady. He carried her to his bed and told the rest of us to leave, saying that he would have her sleep at his place for the night. I couldn’t let that happen so I dragged her out of the house. Ever since then, Professor Jo Min Ki picked on me and tried to embarrass me in front of the class.

“Whenever our department went out for dinner, he would bother the female students next to him, touching their thighs, backs, and faces.

“In 2014, the students of our department went out to a karaoke room. Professor Jo Min Ki claimed that he only ‘hugged them out of encouragement.’ But he made his female students dance and touched their chests. We were all watching him but he acted like it wasn’t a big deal. One of the students was sitting down when he suddenly grabbed her by her legs, making her shirt go up. He pushed another student up against the wall and grinded against her in a sexually suggestive way. Most of us were 21 and 22 years old. We couldn’t stand it any longer so we went to the bathroom and called one of our seniors. We were able to leave the karaoke room once the senior came. But when we were saying bye to Professor Jo Min Ki, he grabbed my face and kissed me on the lips.

“Professor Jo Min Ki made countless sexual remarks to his students and he has done much more severe things to others. Whenever I tried to tell people about this, they made me feel like it was all my fault. But now I know that it’s not. My friends and colleagues who went through so much pain should not be taking the blame. The victims should no longer stay silent, and the perpetrator should not be protected.” 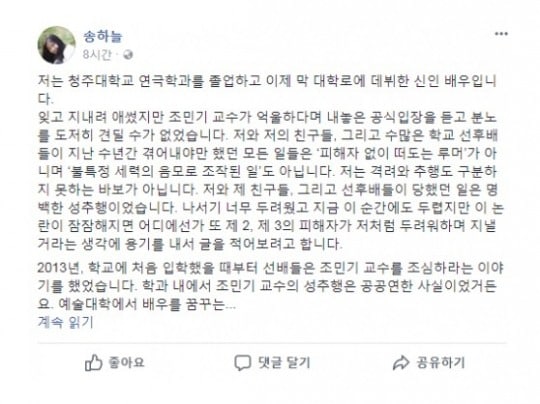 With Song Ha Neul’s testimony causing public outrage, Jo Min Ki’s agency Will Entertainment announced that the actor will be cooperating with police investigation. They further stated that Jo Min Ki has stepped down from his upcoming drama “Children of the Small God (tentative title).