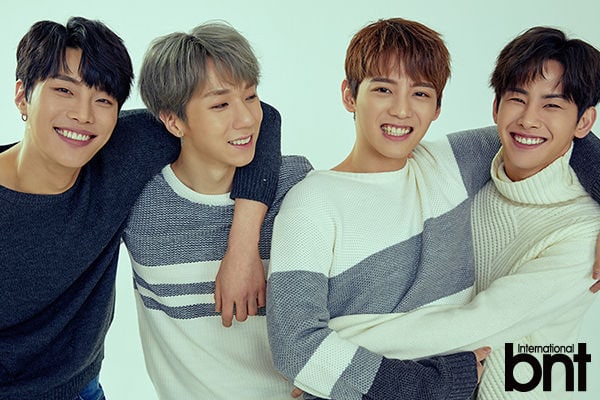 HOTSHOT members Hojung, Timoteo, Yoon San, and Junhyuk recently participated in a pictorial and interview for magazine bnt International, where they shared their thoughts on their group’s participation in idol survival programs.

HOTSHOT is a six-member boy group that debuted in 2014 under Star Crew Entertainment (when it was known as K.O Sound). The group consists of leader Junhyuk, Ha Sung Woon, Noh Tae Hyun, Hojung, Yoon San, and Timoteo.

Timoteo and Hojung recently participated in KBS’s idol rebooting program “The Unit.” At the end of their six-month journey, Hojung made it to the final nine-membered male group and will now be the third HOTSHOT member to promote in a project group this year. Fellow members Ha Sung Woon and Noh Tae Hyun are currently promoting with Wanna One and JBJ, respectively. 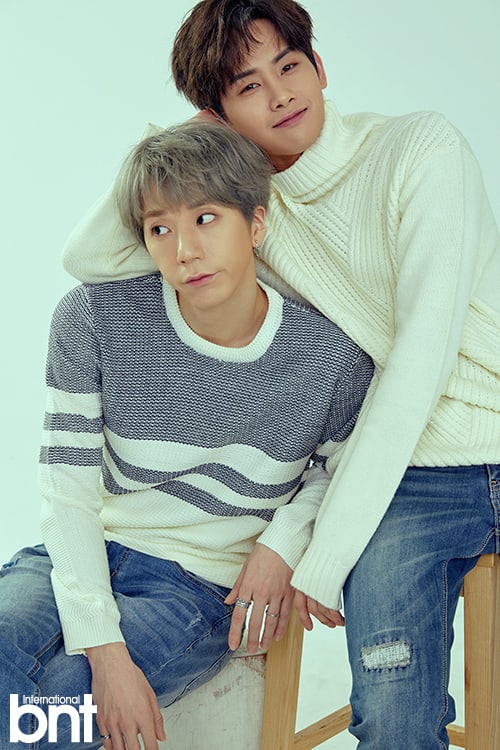 When asked about participating on “The Unit” and coming in tenth place, Timoteo said, “It would be a lie to say I’m not disappointed, but I tried my best so I have no regrets. I’m still dealing with the pain. My heart hurts because I didn’t become a final member, but time will heal it.”

He continued, “To be honest, when we got the offer to appear on the show through our agency, I contemplated for over a month. I hesitated and wondered about what I could show before I made the difficult decision. But now that I think about it, I would’ve really regretted it if I didn’t go on it. After the final ranking, Hojung ran to me and cried, and it felt like I was sending my child off to college. I trust that he will do well for the both of us.”

Although he didn’t place in the top nine, Timoteo says he still gained something valuable. He revealed, “The biggest feat was being able to make our name HOTSHOT more known at least one more time. I was always referred to as ‘Taemin’s friend’ or ‘Ha Sung Woon’s member’ more than by my own name, but I am happy I was able to make my name more well-known to the public through this opportunity.”

He continued, “‘The Unit’ was a program where I really devoted all of my passion. Because I did everything I could, I feel relieved despite the outcome. I will remember it as the best thing I did in my 20s,” and said he wouldn’t be able to put a price on his six-month experience on the show.

Timoteo also mentioned his best friend, SHINee member, and “The Unit” mentor Taemin. He said, “He came from far away to cheer me on when it wasn’t even a day for filming. It gave me a lot of strength. I was grateful that he gave me lots of advice as a senior artist while I was on ‘The Unit.'” 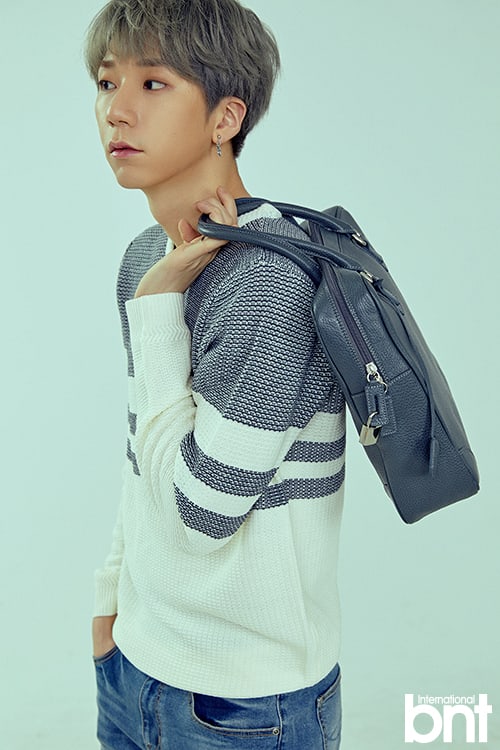 Hojung went to an arts high school, was casted while walking on the streets, and debuted through HOTSHOT. As the group’s hiatus continued to stretch on, he began to feel more lost when he got the offer to appear on “The Unit.” Hojung decided to participate without a moment’s hesitation.

On placing third in the finale and securing himself a spot on the debut project group, Hojung said, “I didn’t expect the results at all. The moment I got called as third place, I had mixed emotions. I will work harder for HOTSHOT.”

Hojung added that he had one small regret while appearing on “The Unit” and revealed, “To tell the truth, I’m less attractive when I open my mouth, so I tried not to be talkative. Perhaps because of that, I didn’t get a lot of screen time, so I felt a bit of regret.” 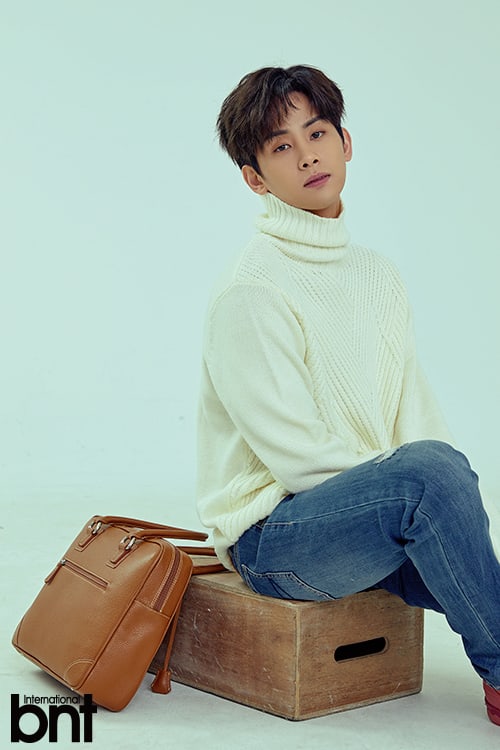 Timoteo chose Boyfriend’s Donghyun as his biggest competitor on the show and expressed wanting to resemble the relaxed vibes of the veteran singer. Hojung and Timoteo also denied having any flings with female contestants and explained, “There were absolutely none. We came to work on separate days and stayed on different floors, so there were barely any moments for us to run into each other.”

Member Junhyuk commented on “The Unit” results and said, “I wanted them to do well and also felt regret at the same time. I personally went to the live finale to cheer them on, but it felt weird to see my members standing on stage with the members of other groups. To be honest, I was a bit sad. However, I know that ‘The Unit’ was a good opportunity for the individual members and for HOTSHOT, so I hope Hojung will work hard for all of our behalf.”

Junhyuk also revealed an exciting update on his music and said, “There will soon be an opportunity for me to release my self-composed tracks.”

The HOTSHOT leader has an uncanny resemblance to actor Ryu Ju Yeol. When the interviewer told him this, he laughed and said, “I think I hear that more than three times a week. I even think we look alike. Personally, I really like it.” 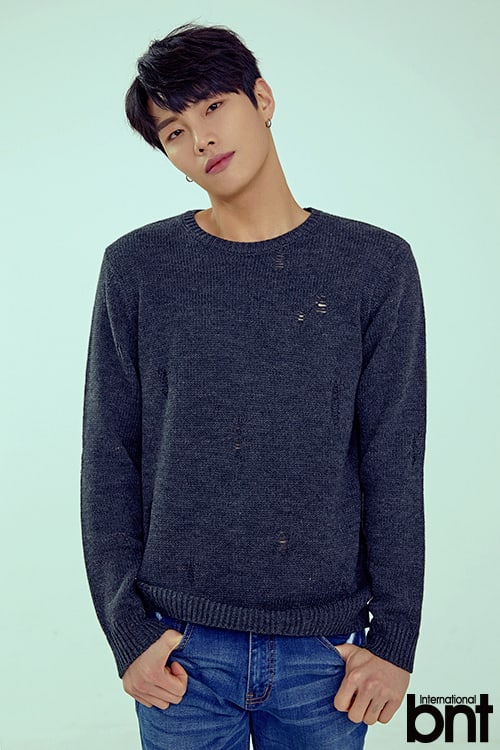 Yoonsan is well-known for his Chanel internship experience and knowledge of four foreign languages. He explained, “When I was in school, my teacher was a Chanel designer. I was just a lowly staff assistant who helped them.”

On his foreign language skills, he said, “I naturally learned them while living abroad when I was young. Now that I don’t use them often, my skills aren’t what they used to be.” 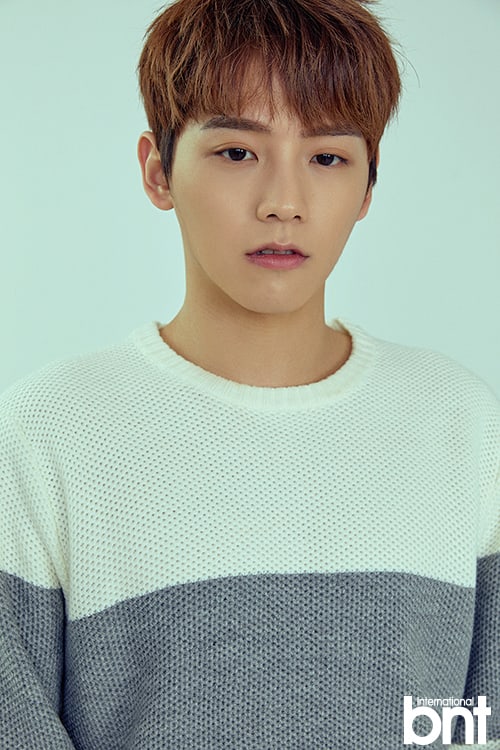 HOTSHOT concluded the interview by revealing some of their habits. Hojung said, “I have a habit of touching the end of the pillow while I’m sleeping. They say it’s because of a lack of affection, but I’m not too sure. It just helps my peace of mind.”

Junhyuk said, “It’s not really a habit, but I go to Lotte World Mall often. It’s near our dorm, so I enjoy people watching and eye shopping.” Timoteo revealed, “The members like to drink together often, but my body can’t tolerate alcohol very well, so I only drink a glass of beer.”

When asked to give words of encouragement to Ha Sung Woon and Noh Tae Hyun who are currently promoting with their project groups, the HOTSHOT members stated, “They’re very skilled members, so we’re not worried. They know how much we are cheering for them even if we don’t say it out loud.”

Check out more photos of HOTSHOT from the pictorial below! 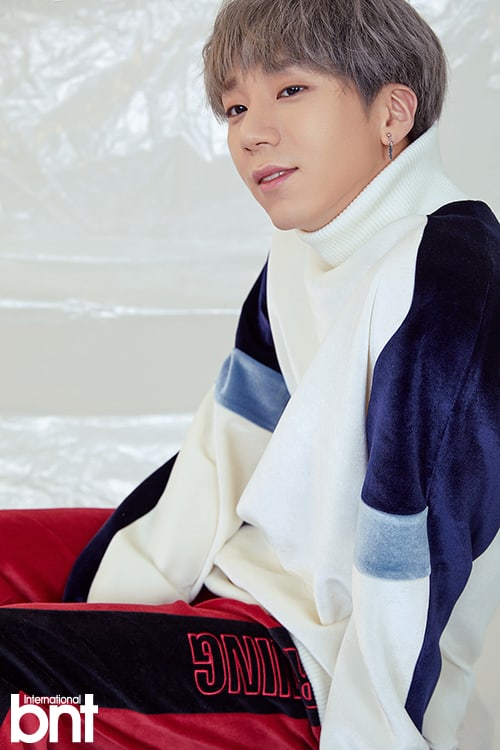 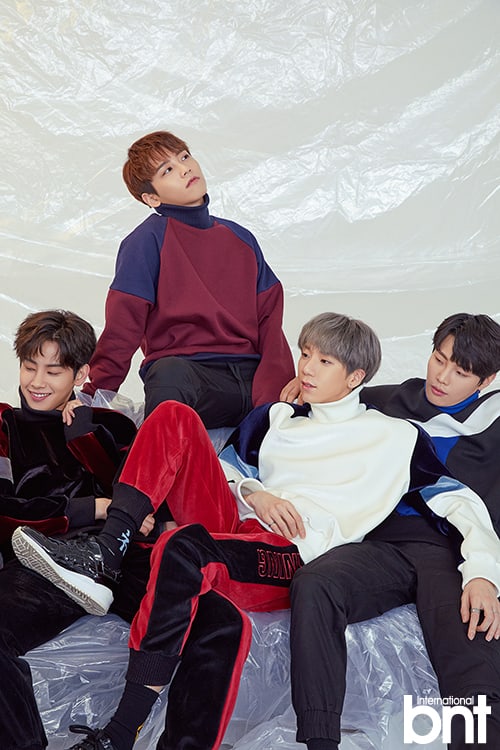 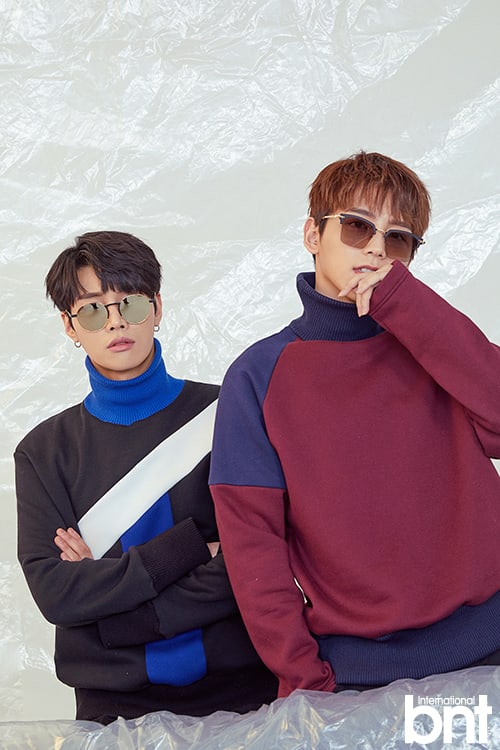 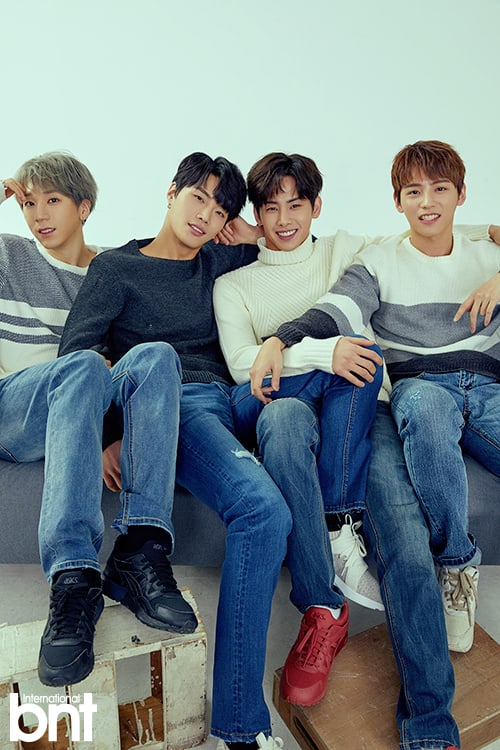 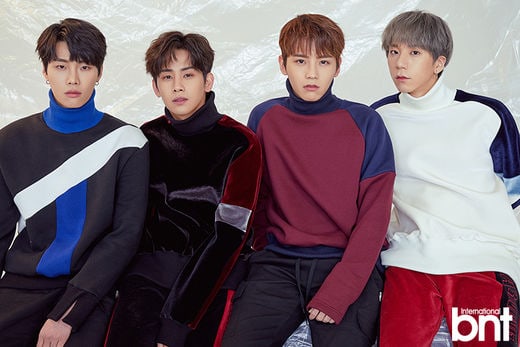 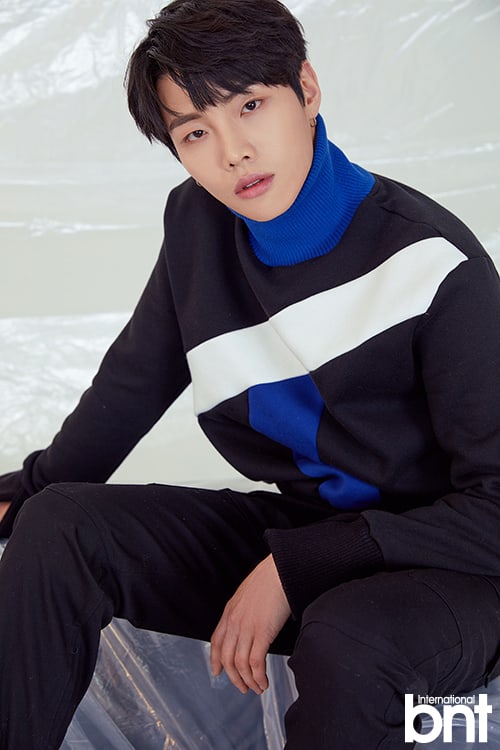 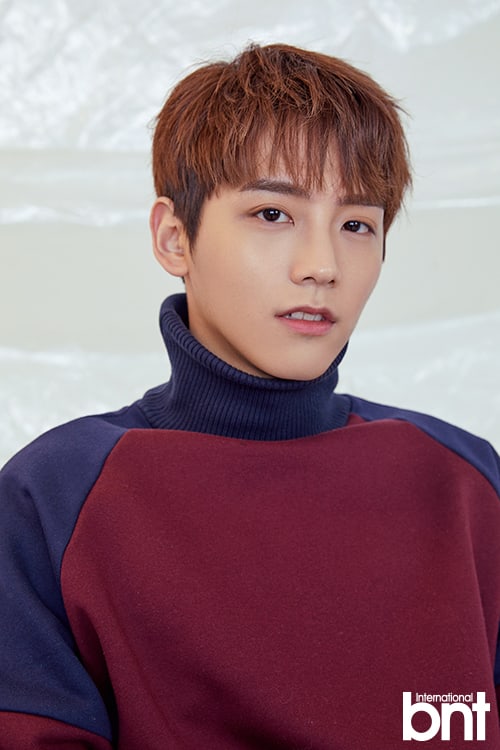 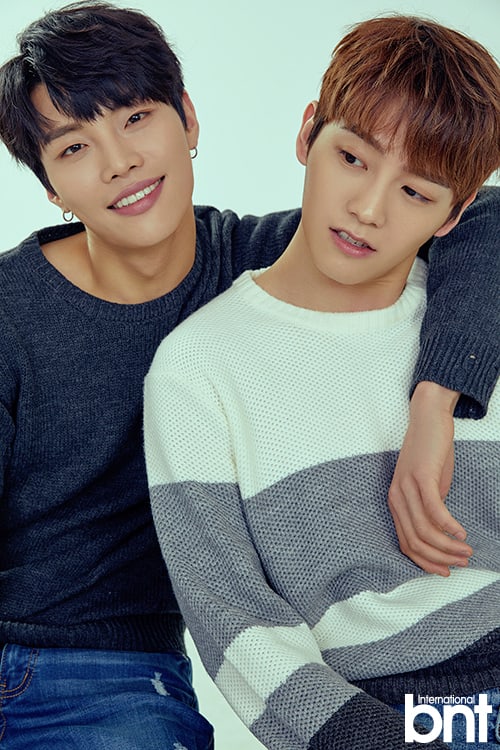 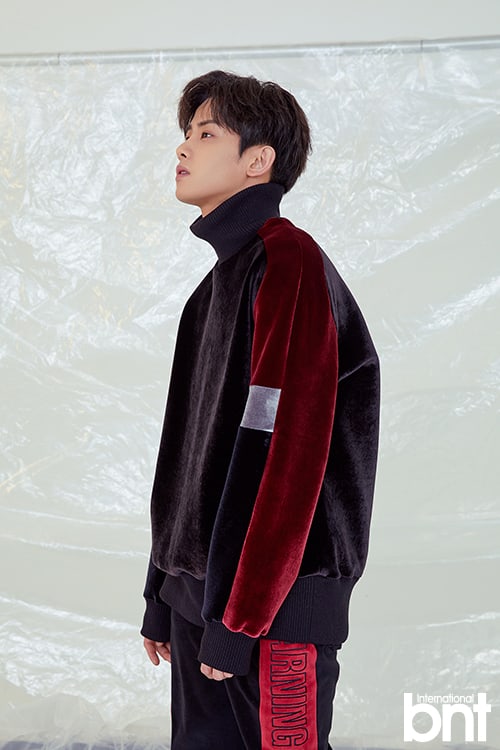 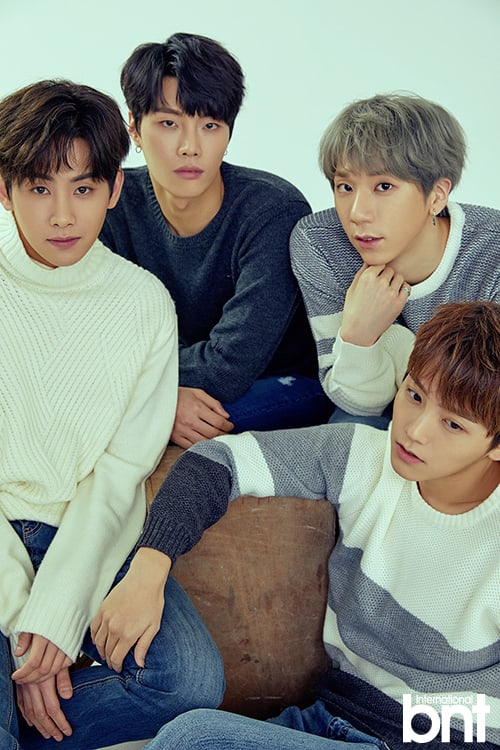 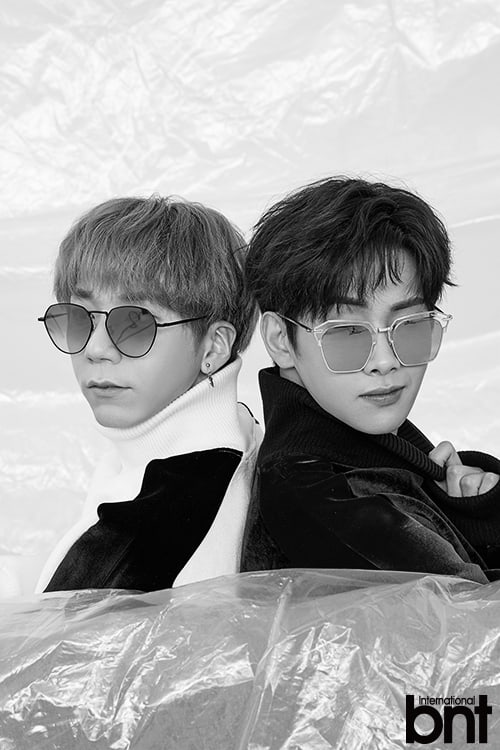 HOTSHOT
BNT International
The Unit
How does this article make you feel?