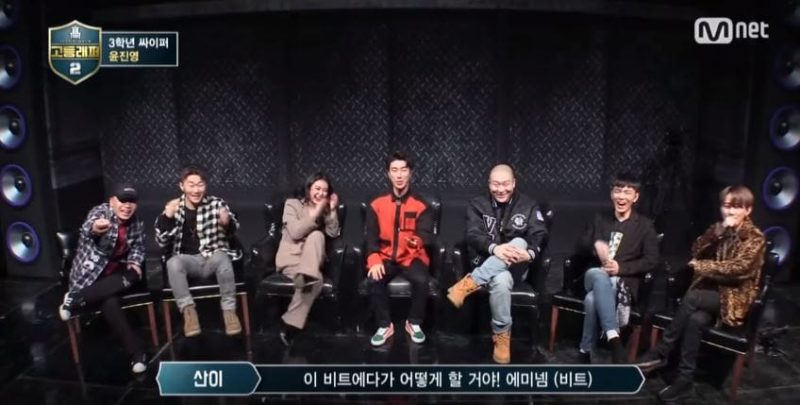 Following the first and second teasers, Mnet’s “High School Rapper 2” has released a preview for the first episode!

In the video, rappers in their third year of high school were called onto the stage for a rap battle against each other. Lee Hwimin of GroovyRoom commented that he anticipated their performance the most, and the participants of the show couldn’t hold in their excitement either.

One of the rappers who caught the eye of many was a boy named Yoon Jin Young from Busan. With overflowing confidence and an easy-going smile, the others couldn’t help but admire his spirit. Many participants recognized him as well, and he broke into a smile, saying, “I feel proud.”

Yoon Jin Young stated, “After watching the previous season, I felt like I would be able to win if I came here. So I came to win.” When the host Nucksal asked him how confident he was, he replied, “I’m 100 percent confident,” causing the other rappers to break into a sweat.

The only rapper who seemed confident enough to go against him was another boy named Oh Dam Ryul. Nucksal asked him what he thought about the situation, and he replied, “I’m going to win, so this is a bit troublesome.”

The rap battle began and the beat from Eminem’s “Lose Yourself” came on, shocking everyone, including the mentors. San E exclaimed, “How are they going to rap to this beat? Even I can’t do it!” Hangzoo clasped his hands together and pleaded, “Not Eminem!”

The only one who was brave enough to rap to the beat was none other than Yoon Jin Young. His rapping made jaws drop in admiration, and even the other participants became fans of him. Oh Dam Ryul grabbed the microphone next, but the video came to an end, leaving viewers with a cliffhanger.

High School Rapper 2
How does this article make you feel?