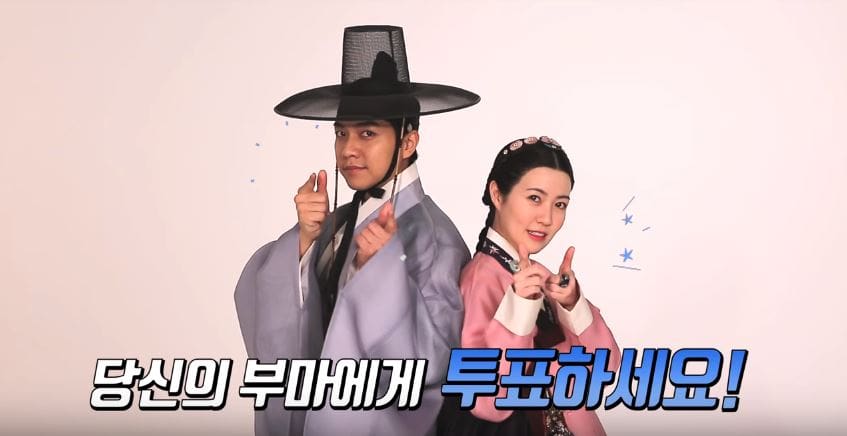 Lee Seung Gi’s new film “Princess and the Matchmaker” has released a clever teaser video with a “Produce 101” theme!

The video features Princess Shim Eun Kyung and her matchmaker Lee Seung Gi, as well as her three suitors Yeon Woo Jin, CNBLUE’s Kang Min Hyuk, and Choi Woo Shik competing in a “Produce 101”-style competition where they try to win over her heart and become the king’s son-in-law.

In the clip, the three candidates attempt to promote themselves in any way they can, leading Shim Eun Kyung to wonder who she should choose.

First off, Yeon Woo Jin claims his greatest charm is the mole above his eye, showing his determination to become the princess’s husband. Shim Eun Kyung confesses, “Personally, I really like the look in his eyes.” Matchmaker Lee Seung Gi adds, “Candidate Yeon Woo Jin is very smart and has a lot of [good qualities].”

The second candidate to captivate Shim Eun Kyung is Kang Min Hyuk. Not only does Shim Eun Kyung fawn over his impressive physique and six-pack abs, Lee Seung Gi also expresses his admiration, saying, “I was shocked. I wondered how he could have such firm muscles without any extra fat.” Kang Min Hyuk laughs and admits, “I tried to expose [my body] as much as I could.”

Who do you think she will choose in the end?

The answer will be revealed when “Princess and the Matchmaker” is released on February 28.