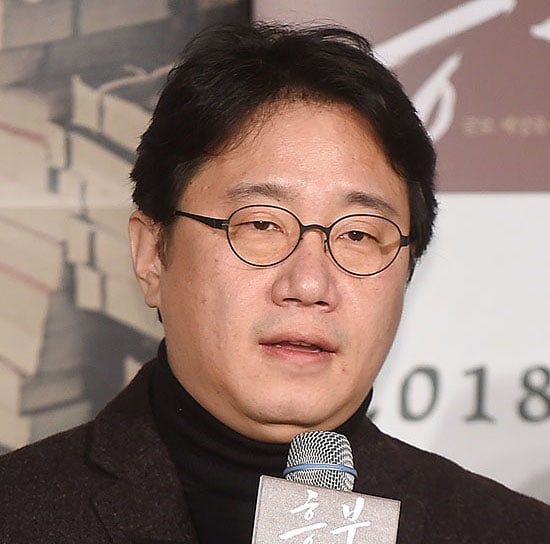 Director Cho Geun Hyun, whose film “Heungbu,” which stars Jung Woo and the late Kim Joo Hyuk and is currently in theaters, has been accused of sexual harassment.

An actress (hereafter referred to as “A”) posted on social media with the hashtag “MeToo” on February 6 and shared the story of a meeting she’d had with Cho Geun Hyun about a music video he was directing. She wrote that the meeting had taken place on the afternoon of December 18, 2017, in the director’s studio.

According to “A,” she and the director only talked about matters related to the music video for 20 minutes of the meeting, which in total lasted for an hour and 20 minutes. For the other hour, she had to listen to Cho Geun Hyun’s obscene comments and gossip, disguised as advice. He had told her about how one actress had seduced a director, and another actress had talked about spending the night with a director when she had an audition.

She wrote, “Cho Geun Hyun said, ‘Acting skills are not what is important for an actress. You have to know how to seduce a man as a woman. What do you think is better, acting clean and remaining as a supporting actress or seducing someone and being the lead?’ He said that actors have to have an animal instinct and know how to make bold choices, and also said, ‘Let’s meet again next time.’ He said, ‘People have to be drunk to become a bit more honest.'”

“A” went on to say that she had wanted to respond in anger, but all she could do was listen because she was in an unfamiliar space and she was scared since he was a man who was stronger than her and she didn’t know what might happen. She said, “I wonder if he is right to have argued that ‘An actress definitely has to sleep with a director.’ I felt really pathetic for having worked so hard to prepare for the interview. I wondered if I had come all this way just to listen to these kind of comments.”

“A” also wrote that she had posted the message in the hopes that other hopeful actors and models would not be harmed in the future.

Cho Geun Hyun sent a message of apology to all the participants of the audition after the post was uploaded. His message to “A” was as follows:

“Regardless of what the situation was, I sincerely apologize if you were hurt because of that meeting. I’m not sure if you’ve seen my films, but I have always strived to have good values, and I’m the type to truly hate causing trouble to others. As it seems that I have harmed someone in this way, I am extremely distressed. It appears that I unintentionally talked for too long about reality because it seems like the film world can be seen in a too romantic way outside of the ecosystem called film. When I think about it now, I realize that my comments could have been interpreted as being overly provocative or biased. I was polite as I spoke passionately and I was disappointed that I hadn’t been able to hear what you had to say, so I wanted to meet with you again. I thought that even that could make you feel pressured, so I didn’t force it. Still, I see that you were hurt and even uploaded a post, and so I am distressed by that itself and my mistake is large. I apologize once again. If I were to have one small wish, it would be that you would take down that post. Films are not the work of one person, they include the hard work of many people, and so I think that my small mistake could diminish the film.”

Before the release of “Heungbu” on February 8, the production company became aware of the situation and excluded Cho Geun Hyun from all promotions for the film, stating that his absence was due to health issues. The director is currently residing in the United States.

XPN
Cho Geun Hyun
sexual violence
How does this article make you feel?