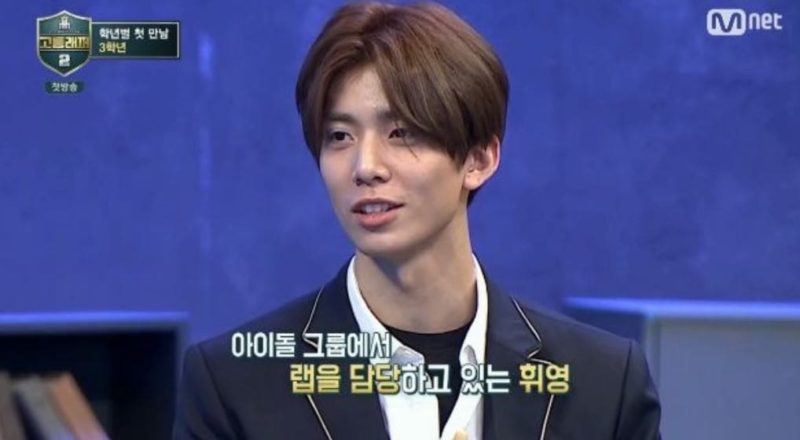 On February 23, Mnet’s hip hop survival program “High School Rapper 2” aired its first episode, where SF9’s Hwiyoung made an appearance as a contestant.

During the episode, the contestants were divided into three groups, with each group consisting of rappers from the same grade in high school. Hwiyoung, who is a high school senior, gathered with other rappers of the same year. The high school seniors saw Hwiyoung and commented, “He looks like a celebrity,” and were curious if he actually was one.

Hwiyoung introduced himself, saying, “I go to Hanlim Arts High School, and I rap in my group. But I hope you won’t think [differently] of me, and I hope we can get along comfortably.” He then lightened the mood and made everyone laugh by saying, “I always rapped at home alone in my room, so I was always interested in a crew. It’s a good thing you don’t have to sign a contract to be in a crew and I wouldn’t be in a double contract.”

The contestants were then told to rap with their respective group members. Hwiyoung surprised the other rappers with his skills, and was even praised, “He has broken the stereotype that idols can’t rap.”

SF9
High School Rapper 2
Hwiyoung
How does this article make you feel?