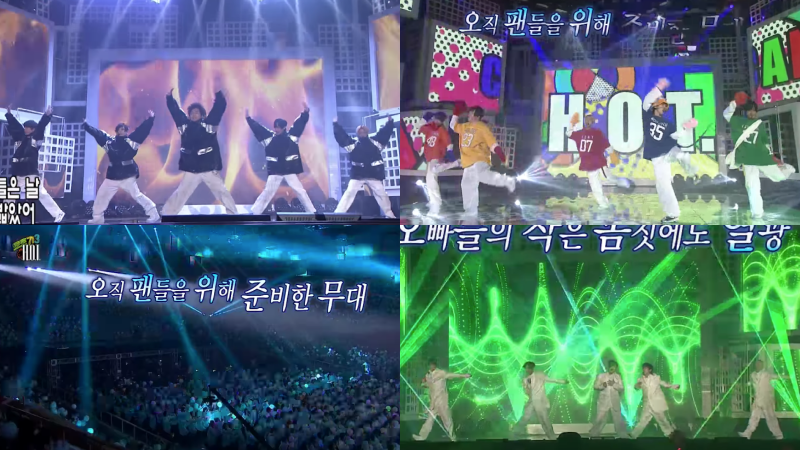 Watch: H.O.T. Finally Returns To The Stage As Five With Emotional Performances Of Legendary Hits

After weeks of preparation and teasers, H.O.T.’s first performance as a complete group in 17 years was shown through the February 24 broadcast of MBC’s “Infinite Challenge.”

The performance originally took place on February 15 at the Olympic Hall in Seoul, and featured 2,500 fans in the audience. During the broadcast, more of the five H.O.T. members’ practice sessions before their performance were revealed as well.

Not only did the first-generation idols work hard for their own performance, but the “Infinite Challenge” cast also decided to cover H.O.T.’s “We Are the Future.” With the help of a familiar face—Mihawk Back (Baek Gu Young), the SM Entertainment choreographer who taught Yoo Jae Suk “Dancing King“—the cast members tried their hardest to perfect the iconic choreography. When the cast showed H.O.T. the results of their hard work, H.O.T. couldn’t hide their amazement and complimented the six “Infinite Challenge” members.

The broadcast also showed a part of the dress rehearsal that took place the day before the performance. When they first arrived at the venue for the rehearsal, the H.O.T. members were overwhelmed with emotions. Despite the fact that Jang Woo Hyuk had injured his ankle and Tony had injured his knee, the whole group gave it their all in the last practice before their performance.

On the day of the reunion performance itself, countless of fans lined up, even some who weren’t able to win tickets. Many of them also brought their families with them as well.

Once everyone was seated, H.O.T. finally made their long-awaited return to the stage and kicked off their performance with “Warrior’s Descendant.” Dressed head to toe in white and passionately shaking their white balloons, the fans broke out into tears upon seeing all five of them performing altogether again.

H.O.T. then greeted fans together and individually, saying, “It’s been 17 years since we’ve greeted you like this. Standing here is like a dream. There are so many things we wanted to say, but we can’t seem to remember any of it now that the opportunity is here.”

The group then went on to perform more of their classic hits: “Candy,” “Happiness,” and “Hope.”

Just as they practiced, the “Infinite Challenge” cast members also took the stage to cover “We Are the Future.” While there was an unexpected incident where Haha fell off the stage, they managed to finish the performance without any serious injuries or mistakes. H.O.T. then reappeared to perform the song as well, followed by “I Yah.”

H.O.T. ended with “The Promise of H.O.T.” and “You & I.” While H.O.T. couldn’t help but tear up with their fans while singing their final two songs, they encouraged fans and said, “Don’t cry. We love you.”

The members addressed their fans once more before leaving the stage. “We’re sorry we returned so late,” Lee Jae Won stated. Tony Ahn added, “Let’s cherish this in our hearts until the day we can meet again,” while Jang Woo Hyuk promised, “We will seriously, really consider promoting again.”

After the performance ended, H.O.T. expressed, “We were really happy. The people who protected H.O.T. over the last 17 years were the fans.”

Check out the full episode!