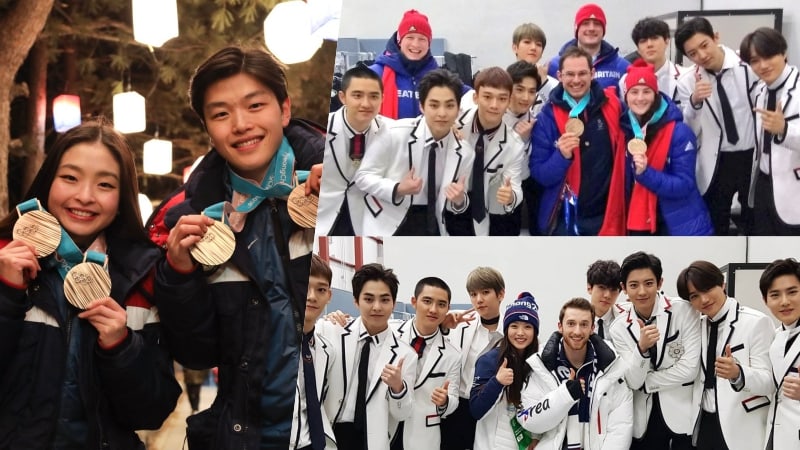 Several Olympic athletes have taken to social media to share their thoughts on the 2018 PyeongChang Winter Olympics Closing Ceremony!

After CL, EXO, and Honey Lee performed at the closing ceremony on February 25, a number of athletes posted about the event online.

U.S. ice dancers and Olympic bronze medalists Maia and Alex Shibutani expressed their admiration for the performers on Twitter, with Maia praising CL in particular.

Umm @chaelinCL was ELECTRIC. So excited I got to see her perform live!!! ??

Wow. The @pyeongchang2018 Closing Ceremony was ridiculous! @chaelinCL, @weareoneEXO, @MartinGarrix and an awesome presentation from @Beijing_2022! ??

The sibling duo previously revealed that they are fans of BTS, even going so far as to bring customized U.S. Olympic Team hats to Korea as gifts for the members.

Korean ice dancers Yura Min and Alexander Gamelin both posted a photo on Instagram that they had taken with EXO backstage at the closing ceremony, along with a photo of an autographed copy of the group’s album “THE WAR: The Power of Music.” Alexander Gamelin excitedly wrote on his Instagram, “We met EXO! Dae~bak.”

The two ice dancers skated to BIGBANG and 2NE1’s “Lollipop” for their performance at the 2018 PyeongChang Winter Olympics Figure Skating Gala the night before.

Laura Deas, a skeleton racer from Great Britain and another Olympic bronze medalist, also managed to snap a photo with EXO and some of her teammates backstage at the closing ceremony.

Oh and we bumped into @weareoneEXO backstage before their @pyeongchang2018 closing ceremony performance ???? pic.twitter.com/5asZHuxW4l

Russian figure skater and Olympic silver medalist Evgenia Medvedeva, who has frequently talked about her love of EXO and who listened to the group’s music before her record-breaking short program on February 11, finally got to meet her idols as well. The skater posted her photo with EXO on Instagram and wrote, “Dreams come true.”

Congratulations to all of the athletes who competed in the 2018 Winter Olympics!