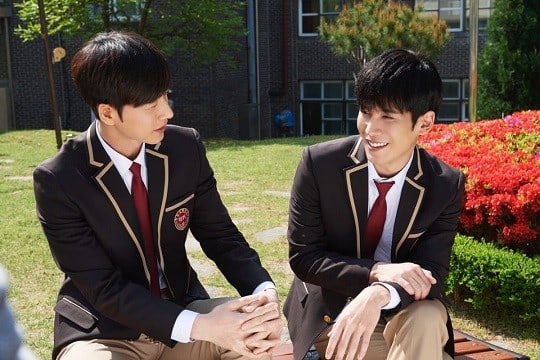 According to his agency Mountain Movement Story, Park Hae Jin sent a coffee truck to the set of SBS’s “Return” on February 25. The truck was sent with flowers and a fruit basket, as well as a phone call from Park Hae Jin to belatedly celebrate Park Ki Woong’s birthday, which was on February 13.

An agency representative stated, “Park Hae Jin has been busy filming his drama ‘Four Sons,’ as well as promoting his upcoming film ‘Cheese in the Trap.’ Park Ki Woong has also been busy filming his drama “Return,” and the two were unable to meet for Park Ki Woong’s birthday. Park Hae Jin decided to send him a coffee truck because he felt bad about not being able to celebrate his co-star’s birthday in person.”

Park Ki Woong shared a photo of the coffee truck on his Instagram account with the caption, “I know this guy… he’s really sweet. Thank you, hyung!”

Park Hae Jin’s agency also shared photos on their Instagram account with the caption, “Our In Ho, please drink this warm tea while you work.”

On the coffee truck was the message, “In Ho, stay safe while filming your drama and good luck! I’ll always be supporting you.” The agency source added, “Park Hae Jin looked after Park Ki Woong a lot on the set of their film, and would affectionately call him In Ho (Park Ki Woong’s character). You can feel how much the two actors care for each other through the gift.”

Park Hae Jin and Park Ki Woong are set to appear in the film “Cheese in the Trap” alongside Oh Yeon Seo. The film will be released on March 14.

Park Hae Jin
Park Ki Woong
Return
Cheese in the Trap (film)
How does this article make you feel?