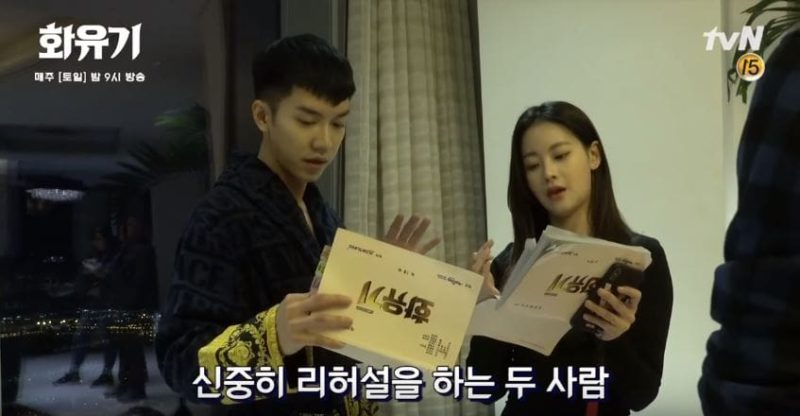 In the beginning of the video, Lee Seung Gi and Lee Se Young are filming outside in the valley area. Despite the frigid weather, they do their best to immerse into their characters and express the proper emotions. During a break, Lee Seung Gi and Lee Se Young discuss the perfect way to portray the next scene while wearing a thick jacket with padding and a fleece blanket wrapped around her waist respectively to protect themselves from the cold.

While filming the next scene, Lee Seung Gi suddenly approaches Lee Se Young, catching the production crew off guard. Lee Seung Gi explains, “I’m supposed to exit this way.” Seeing that the direction leads him right into the lake, he points to it and humorously asks, “Then am I just supposed to fall in the water?,” making Lee Se Young and the crew laugh.

Next, Lee Seung Gi starts to film the scene where Cha Seung Won hands him the old version of the geumganggo (magic bracelet). However, once the director calls “action,” Lee Seung Gi bursts into laughter, and Cha Seung Won starts to laugh along, saying, “I knew you were going to laugh.”

Last but not least, Lee Seung Gi pairs up with Oh Yeon Seo to film their kiss scene. They rehearse their lines and go over the script in a detailed manner to make sure they’re on the right page.

Watch the making clip below!

If you missed the first episode, you can watch it below.