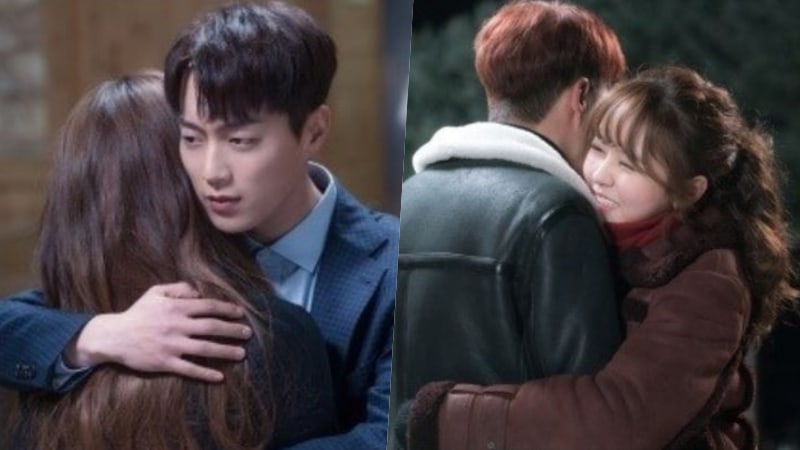 Highlight’s Yoon Doojoon and Kim So Hyun have been warming our hearts with their sweet romance on KBS drama “Radio Romance.”

In the drama, Yoon Doojoon plays a top star Ji Soo Ho who agrees to become a radio DJ while Kim So Hyun plays Song Geu Rim, the radio program’s scriptwriter. Although they were off to a rocky start, the two get closer after working together in the radio booth. Not only do they grow into their roles as radio DJ and writer, but they also grow in their relationship with each other. Here are three reasons the two characters have hugged on the drama so far.

Due to problems with transportation, in order to air their live radio broadcast on time, the two were forced to air the broadcast in the countryside by themselves. For the first time every, Song Geu Rim wrote her own script, and her first words were introduced to the world by Ji Soo Ho. She previously had expressed, “I had always dreamed of the first day that my own DJ would read my words.” After the broadcast, she could not contain her joy and ran to Ji Soo Ho and embraced him, saying “I’m so happy.” Ji Soo Ho could not hide his surprise and slight nervousness at her unexpected hug. However, her happiness overflowed and created a warm mood.

When Ji Soo Ho confessed the reality behind his family, Song Geu Rim did not hesitate to comfort him with a hug. He shared, “I call my mother my CEO. She’s not my real mother. I found out on my 9th birthday.” Song Geu Rim told him, “When you look at me like that without speaking, I want to embrace you,” and gave him a hug that expressed everything she had to say. This was a turning point in the beginning stages of their relationship, as she began to ponder why she had hugged him, and eventually confessed, “I want you to forget your sadness and to stop your tears when you’re in my arms.”

The two eventually began their relationship. Ji Soo Ho very openly told her, “Let’s date. I like you,” to which Song Geu Rim also straightforwardly shared, “I want to date you.” Their relationship was warm and sweet, but eventually, they came across their first rough patch. Because of Nam Joo Ha’s (played by Oh Hyun Kyung) scheming, Ji Soo Ho was on the verge of leaving the radio program, while the radio program was also on the verge of cancellation. Ji Soo Ho refused to believe anything he didn’t hear himself, and found Song Geu Rim waiting for him in their hideaway. He gave her a strong hug, showing just how much their relationship was built on trust in each other.