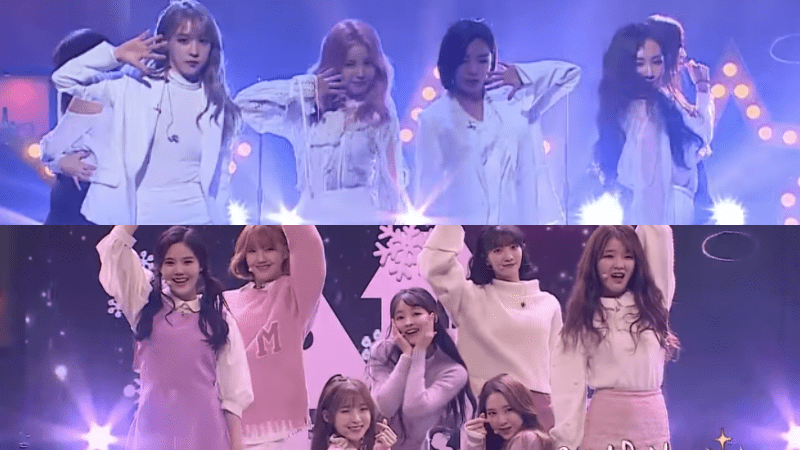 Watch: MAMAMOO And Oh My Girl Reimagine Nostalgic Hits From Past Decades

“Sugar Man 2” connects older and younger generations through music by inviting currently active musicians to remake classic hits from the past. Artists of the original songs are also invited to discuss their music and give updates on what they have been up to.

During the March 4 broadcast, groups Cola and 7 Princess were the featured guests who had their songs covered.

Cola is a dance group that debuted in 1996 with three members, Park Joon Hee, Kim Young Wan, and Kim Song. Their arguably most famous title track “Gloomy Coincidence” is well-known across generations, and Baby V.O.X remade it in 2002 as “Coincidence.”

Known as the youngest girl group to debut, 7 Princess debuted in 2004 with members born in 1995-1999. The group had consisted of rotating members, and seven of them appeared on “Sugar Man 2” to perform their most popular hit “Love Song,” which uses motifs from the classical piece “Salut d’Amour” composed by Edward Elgar. Notably, all 100 audience members said they recognized the song for the first time ever this season.

Challenged to remake Cola’s “Gloomy Coincidence,” MAMAMOO showcased their powerful vocals and strong harmonies as they added tango and R&B elements to the original song.

Oh My Girl were given the mission of creating a 2018 version of 7 Princess’s “Love Song.” With a light EDM beat added to the overall track, the girl group highlighted their sweet voices in their version.

In the end, the audience voted for MAMAMOO’s rendition, which was especially popular with those in their teens.

MAMAMOO
Oh My Girl
Sugar Man 2
Cola
How does this article make you feel?