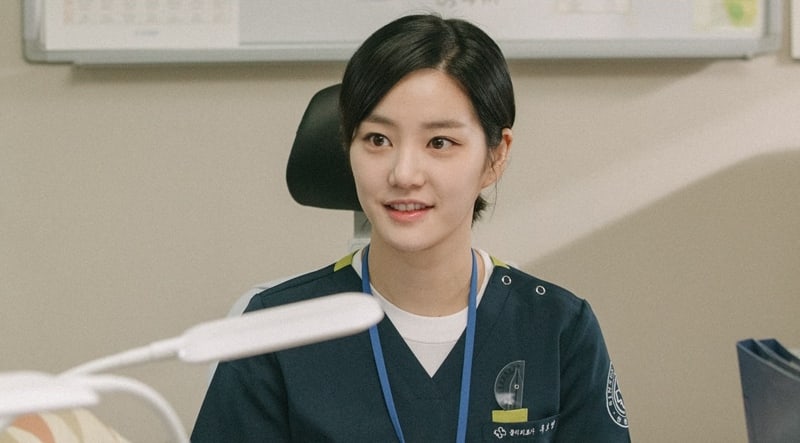 “You Who Forgot Poetry” is a new type of medical drama that will revolve around the lives of the medical staff of a hospital. The drama will tell the stories of physical therapists, radiologists, medical interns, nurses, and other hospital workers.

In the stills, Lee Yoo Bi is at work dressed in her physical therapist uniform. She sits smiling behind a desk at the hospital, concentrates on the treatment of a patient, and gives out orders after looking at a patient’s chart. She also helps a patient practice walking and focuses on a therapy session for a patient with an amputated leg.

The actress reportedly wowed the production crew with her manners and commitment to the drama, which will mark her return to television after three years. Upon arriving on set, the actress smiled and respectfully bowed to the staff. Before filming, she prepared for her role by gaining experience as a physical therapist. She also asked for detailed advice from the on-site advisory team about hand motions and has continuously earned praise from the crew members.

Lee Yoo Bi said, “It’s an honor to be a part of this new kind of drama about a new area and topic that has always been close to us but never portrayed in a drama before. Thank you for making me the female lead in a drama that is attempting something new.”

She continued, “Since I am happily working with many different actors, I look forward to a fun drama. I will try my best until the very end as physical therapist Bo Young so that many people can empathize and feel happy. I will also work hard so that this can be the character I was born to play. Please give lots of love to ‘You Who Forgot Poetry.'”

This new tvN drama will be directed by Han Sang Jae of “Rude Miss Young Ae” and written by Myung Soo Hyun of “Drinking Solo.”

“You Who Forgot Poetry” will air on March 26 after the end of “Cross.” Take a look at the drama’s teasers and posters!

Lee Yoo Bi
You Who Forgot Poetry
How does this article make you feel?