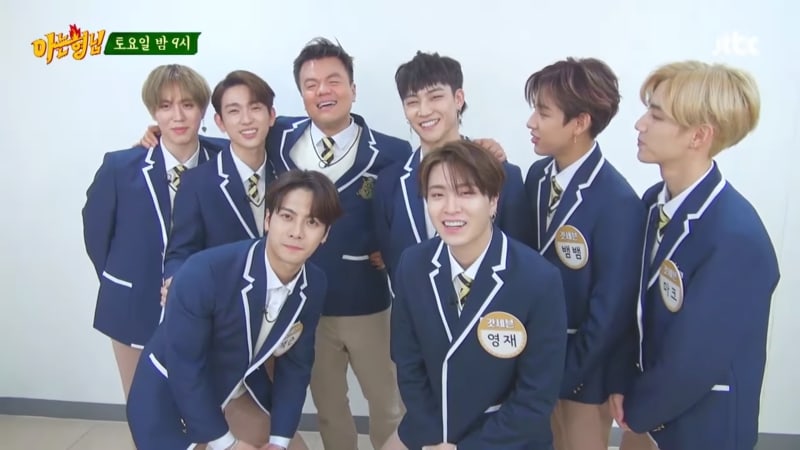 Watch: GOT7 And Park Jin Young Have Fun Backstage At “Ask Us Anything”

JTBC’s “Ask Us Anything” has released a behind-the-scenes video featuring GOT7 and Park Jin Young!

This behind-the-scenes clip shows GOT7 dressed in school uniforms and waiting in their dressing room before filming. JB took hold of the camera and asked the members questions about the show.

While eating some kimbap, Yugyeom answered that he has the best chemistry with Lee Soo Geun because he’s like an older brother.

JB then interviewed Jinyoung and Jackson about appearing on the show. Jinyoung said, “It’s so fun. It’s more lively than I thought” and Jackson joked, “I think Seo Jang Hoon is a bit sleepy today.” When asked to choose the member who was adjusting well to the show, Jinyoung chose Jackson while Jackson chose himself, JB, Jinyoung, and Yugyeom.

Jinyoung then turned the camera to JB, and filmed and Jackson making up from a playful “feud” from the show. Youngjae chose himself as the member who looks the best in a school uniform and the other members poked fun at what he was like in high school.

When asked which member he expected to do well and not so well on the show, BamBam answered, “Yugyeom isn’t very observant and bad at games. Mark is good at games.”

Park Jin Young also joined the GOT7 members in the dressing room and revealed that he was wearing a school uniform for the first time in his life. He chose Jackson as the member who will be best at filming and JB as the member he was the most worried about.

“Our serious, documentary-style JB” said Park Jin Young. He then encouraged JB to be himself and assured him that he will take care of the variety portion of the show.

“Ask Us Anything” airs on Saturdays at 9 p.m. KST. Watch the fun behind-the-scenes clip below!

GOT7
Ask Us Anything
Park Jin Young
How does this article make you feel?