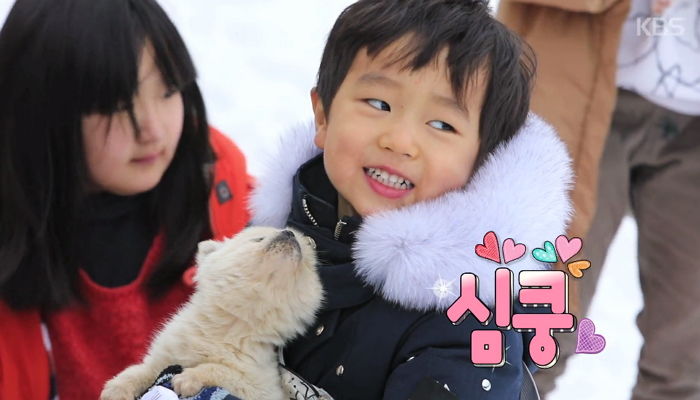 Watch: Seungjae To Become The Adorable Caretaker Of A Puppy In “The Return Of Superman”

Seungjae has fallen in love with a puppy as adorable as him!

A teaser was released showing Seungjae and his dad Go Ji Yong traveling to Gangwon Province in the upcoming episode of KBS 2TV’s “The Return of Superman.”

On this day, Seungjae sets off by himself to complete a task that his dad has given him. However, he meets an unexpected friend along the way when he sees a group of kids and two puppies.

Completely forgetting his original task, Seungjae falls in love with the puppy. He can’t stop saying, “He’s so cute,” over and over again. While walking around with the puppy in his arms, he accidentally slips because of the snow on the ground. While the other children worry about him, he immediately checks over the puppy and says, “I’m sorry, puppy. You’re a baby, I’m sorry.”

As Seungjae keeps showering the puppy with love, the puppy looks up at him and Seungjae exclaims, “Oh, he looked at me! He likes me,” and, “You’re a baby and I’m your older brother.”

Seungjae and the puppy’s adorable chemistry will continue in the upcoming episode of “The Return of Superman,” which will air on March 11 at 4:50 p.m. KST.

Meanwhile, check out the latest episode below!

The Return of Superman
Seungjae
How does this article make you feel?