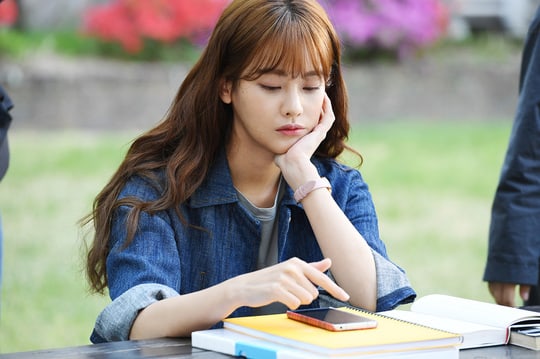 Recently actress Oh Yeon Seo sat down for an interview to talk about her upcoming film “Cheese in the Trap.”

During the interview, she talked about what drew her to the character of Hong Seol, the female lead. “I wanted the role because I thought it might be the last college character I play,” she shared. “I wanted to do a movie and ‘Cheese in the Trap’ was a good fit from the beginning to the end. I met a lot of different people and the set was fun too.”

She added, “[Hong Seol’s] strengths were really clear to me, too. She thinks she’s plain in terms of looks, but her personality isn’t plain at all. That’s why there’s so many balls in the air in terms of narration. These ambiguous feelings keep changing. I wanted to focus on showing how two people like each other but can’t express it, or how she hated him at first but learned to like him. A lot of the supplementary scenes were cut for time, and I feel a bit of regret about that. But that’s something you can’t do anything about as an actor.”

“Cheese in the Trap” tells the story of a group of college students, particularly Yoo Jung (Park Hae Jin) and Hong Seol (Oh Yeon Seo), and is based on the webtoon of the same name. A tvN drama also based on the webtoon aired last year, while the film will premiere in South Korea on March 14.

Oh Yeon Seo
Cheese in the Trap (film)
How does this article make you feel?