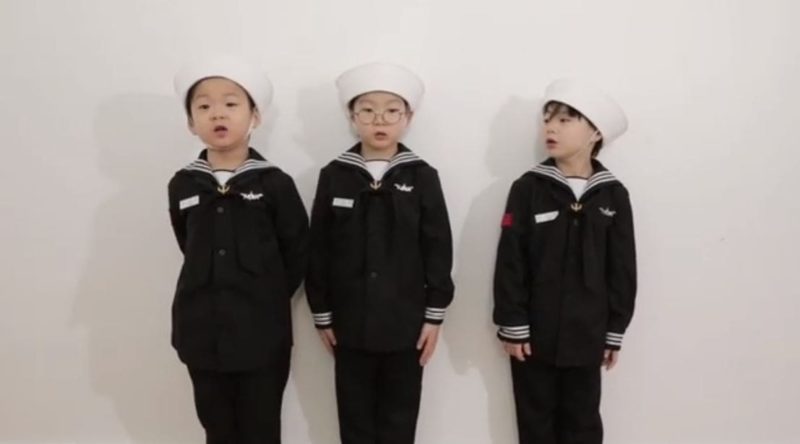 On March 14, Song Il Gook uploaded an adorable video of his triplets Daehan, Minguk, and Manse to commemorate White Day.

The three siblings wear sailor uniforms and adorably shout, “At ease!” and “Salute!” They keep goofing off and have end up taking multiple takes, with the three congratulating their granduncle on his retirement. The video ends with the triplets smooching the camera lens to send kisses to their granduncle.

The actor also uploaded a heartwarming story behind the video and talked about why White Day was an important day for him. Song Il Gook shared that his wife finally said yes to his proposal on White Day. However, he needed to get permission from her parents. His high school teacher, who coincidentally was his wife’s uncle, spoke highly of him to her parents, who eventually gave their consent.

Song Il Gook wrote, “White Day ~ They say it started as a business tactic, but since it’s a meaningful day to me, I’ll write a few words. I proposed to my wife on Christmas Eve and hadn’t gotten a response. The next White Day, my wife suddenly returned the ring in the box to me. In that moment, I thought, ‘Huh? What is this, did Jumong just get rejected?’ (At the time, I was still filming ‘Jumong‘). A few minutes that felt like years passed, and my wife told me, ‘Please put the ring on my finger!’ (Of course haha). I’d gotten my wife to say yes but I still had to get permission from her parents. My high school teacher who was also my wife’s uncle (we found this out when we were dating and were really surprised!) said good things about me to her parents, despite the fact that I wasn’t the best student at the time. If it wasn’t for that teacher, Daehan, Minguk, and Manse might not have been born. It’s White Day now, and I’m thinking a lot about that teacher who retired this year. Thank you teacher~.”