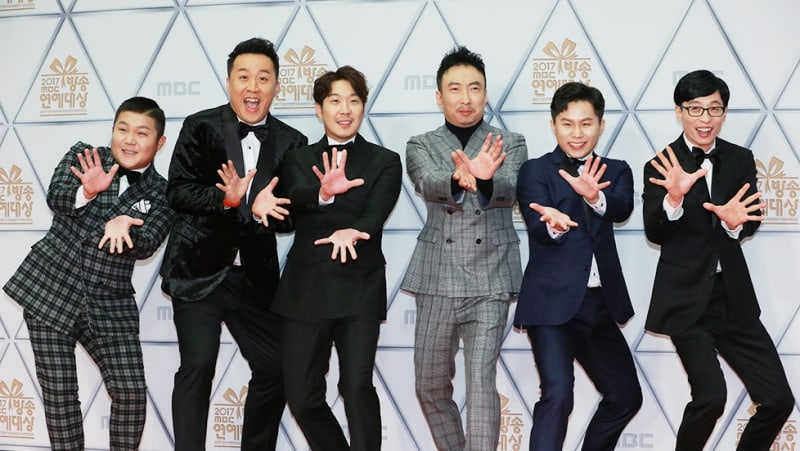 On the March 17 episode of MBC’s “Infinite Challenge,” the cast had a fierce match with the Korean women’s curling team. From actually trying curling to connecting the athletes to their favorite stars like Wanna One’s Kang Daniel and SHINee’s Taemin, the episode was one with a lot of laughter.

In between all the laughter were moments of sadness at the show’s conclusion. To end the episode, Yoo Jae Suk stated, “We will be saying goodbye here,” making the members surprised as it was previously announced that the last episode would air on March 31. Yoo Jae Suk then clarified, “We will be airing next week.”

Park Myung Soo commented, “I thought it was our last,” to which the production staff captioned, “He knew it wasn’t this week, but his heart is already on standby.” Yoo Jae Suk continued, “We have a little left. There’s not many days we have left to shout it, but let’s shout it together— Infinite Challenge!” ending the episode with the show’s customary chant.

After the show’s broadcast, Jung Jun Ha also shared his thoughts on the program’s end. The comedian posted a photo of a sign on a cash register, which says, “Every Saturday at 6:20 p.m. Tune into ‘Infinite Challenge!'” His caption reads, “I’ve always had this posted on our shop’s cash register…” and used hashtags to express, “There’s not a lot of time left. Suddenly I feel strange today. Time is really fast, I didn’t realize it. Something’s strange. I want to listen to old songs.”

It was previously revealed that “Infinite Challenge” will be concluding the season on March 31. MBC has also stated that producer Kim Tae Ho will be returning after fall with either a new season of “Infinite Challenge” or a new program. Replacing the program’s time slot will be a new variety show headed by producer Choi Haeng Ho.