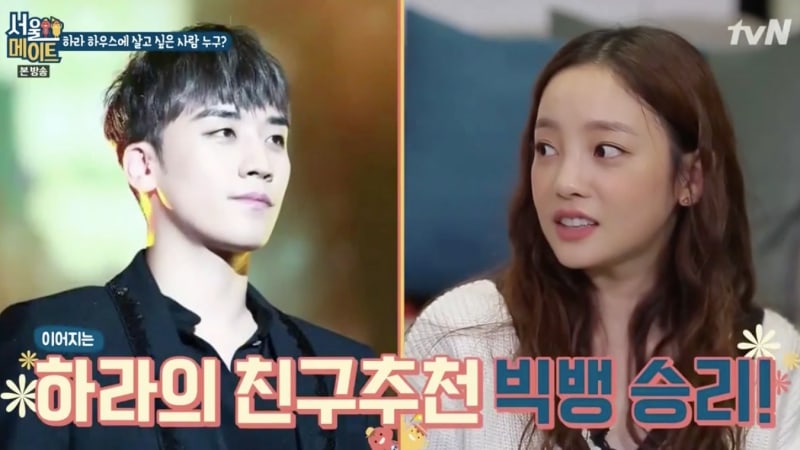 On the latest episode of tvN’s “Seoulmate,” Goo Hara chose BIGBANG’s Seungri as someone she thought would make a great host!

“Seoulmate” is a reality show in which celebrities host foreign visitors at their homes and introduce them to Korean culture by acting as their tour guides. Goo Hara is one of the regular hosts on the program, along with comedians Kim Sook and Kim Joon Ho.

During the March 17 broadcast of the show, Kim Sook remarked, “Ever since the program started gaining more popularity, there have been a lot of people interested in becoming a host.” She then asked her fellow hosts, “Out of the people you know, is there anyone you want to recommend [as a potential host]?”

Goo Hara responded by lavishing praise on her good friend Seungri. She replied, “I think Seungri would do a really good job on ‘Seoulmate.’ He’s good at foreign languages. He knows Chinese, Japanese, and English. I think he’d even be able to handle 10 visitors at once.”

The former KARA member previously made a video call to Seungri on the show in February, when one of her guests mentioned that she was a fan of BIGBANG.

Would you like to see Seungri as a host on “Seoulmate”? Leave your thoughts below!

BIGBANG
Goo Hara
Seungri
Seoulmate
How does this article make you feel?