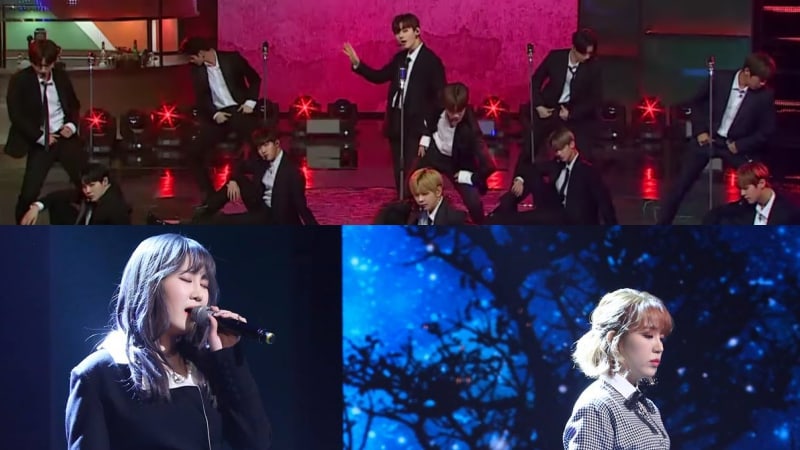 Watch: Wanna One Faces Off Against Park Jimin And Baek A Yeon With Remakes Of Classic Hits On “Sugar Man 2”

This week’s episode of JTBC’s “Sugar Man 2” featured a performance by Wanna One and a duet by Park Jimin and Baek A Yeon!

The March 18 episode celebrated Lee Hye Young and Lee Ji Hoon’s hit songs. Lee Hye Young appeared as the “Sugar Man” for Yoo Jae Suk‘s team. She shared that she is a fan of Wanna One and explained how it contributed to her appearance on the show.

She said, “I’ve received many offers until now, but I rejected all of them. I jokingly said that I would come on with Wanna One if they appeared, and it really came on true.”

Lee Hye Young also mentioned her ex-husband Lee Sang Min and revealed that he composed her song “La Dolce Vita.” She thanked him and praised his skills on variety programs.

Wanna One then performed their rendition of Lee Hye Young’s “La Dolce Vita.”

Yoo Hee Yeol‘s “Sugar Man” was introduced by Girls’ Generation member YoonA via a video message. It turned out to be Lee Ji Hoon, who was a popular singer and actor. He told fans that he’s been actively working as a musical actor for the last 10 years.

When asked why he disappeared from the music scene, he answered, “My last two albums didn’t do well. I was in debt and couldn’t pay back my producer.” He added that he was able to pay back his debt while doing other promotions and said that he set up a one-man agency since then.

In the end, Yoo Jae Suk’s team (including performers Wanna One) came in first with a score of 52, as Yoo Hee Yeol’s team received 48 points.