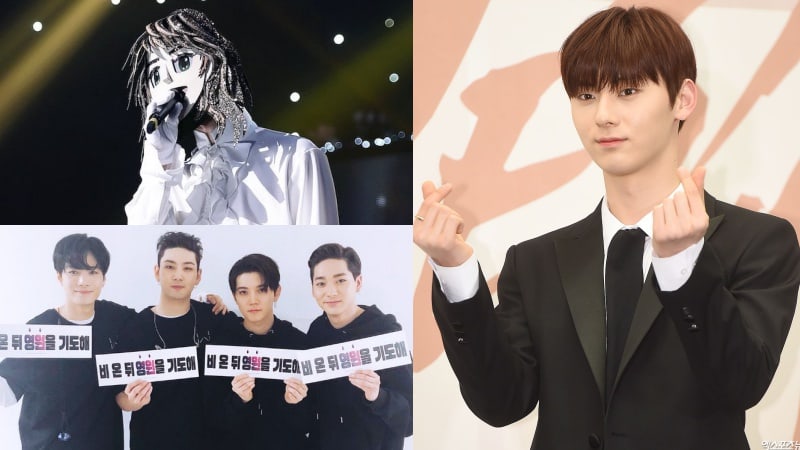 Hwang Min Hyun partook in Wanna One’s press conference for the release of their second mini album “0+1=1 (I Promise You)” and spoke about his experience on MBC’s “King of Masked Singer,” as well as NU’EST W’s recent concerts.

Hwang Min Hyun recently wowed with his unique vocal tone during his appearance as “Terius” on MBC’s “King of Masked Singer.” When asked about it, he stated, “It was a program that I’ve wanted to appear on for a long time, and I was so happy to have been given such a great opportunity,” and “I was so nervous that day because I would be standing on stage by myself when I was used to being with the other ten members. So, I bought myself a bottle of cheongsimhwan (herbal medicine to calm one’s heart) and drank that an hour before going on stage.”

He continued to state, “I was so happy to have the opportunity to sing a song that I liked in my own voice. If I ever get the chance to sing by myself again, I’d like to perform a self-composition.” Hwang Min Hyun was also asked which other Wanna One member he’d like to see on the show and he picked Bae Jin Young. He explained, “Jin Young has such a nice vocal tone that I think it would be great if he got the chance to show it off through a solo performance.”

Hwang Min Hyun was also asked about his fellow NU’EST members, who held their first solo concert as NU’EST W over the weekend. He replied, “I heard that their concert, which they worked hard to prepare for, ended well. It’s nice to see that both I and NU’EST W are working hard on our activities. I hope we all continue to do our best in our respective places.”

Wanna One made their comeback with their second mini album “0+1=1 (I Promise You)” on March 19 at 6 p.m. KST. Check out the music video for their title track “Boomerang“!

NU'EST
Wanna One
Hwang Minhyun
XPN
NU'EST W
The King of Mask Singer
How does this article make you feel?