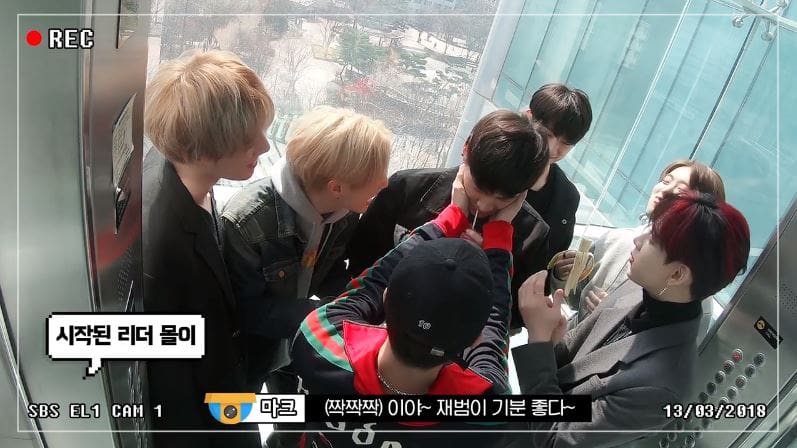 Watch: GOT7 Shows Their Excitement About Success Of New Song And Cutely Teases JB In Fun Video

The members of GOT7, especially leader JB, were in a celebratory mood from topping major realtime charts with their new song “Look.”

In a video from SBS’s YouTube, the seven of them entered an elevator to go to SBS PowerFM radio show “Choi Hwa Jung’s Power Time” on the day after their song was released. The track topped many major realtime charts and achieved the group’s best results on the charts yet.

In the clip, JB couldn’t contain his excitement about being in a glass elevator, and as soon as it started to head upwards, he pretended to be a superhero flying upwards with one fist in the air. After witnessing a childlike side of their leader, Jinyoung commented, “You’ve gotten a lot younger.” Mark added, “JB is in a good mood right now.” The other members started to cheer and clap while babying JB, and Jackson even squeezed JB’s cheeks.

BamBam asked JB, “How did you feel yesterday, JB? The rankings were great.” JB replied, “We were able to achieve rankings we never got before. So I’m feeling happy.” Yugyeom added, “I was a bit touched.”

During the rest of the elevator ride, they talked about how JB’s hair got longer and joked around with his shirt as they attempted to feed a banana to the character on it. JB suggested, “Should we sing our song? We need to warm up.” Yugyeom sang his line from “Look” first, and JB sang after him.

You can watch GOT7’s funny elevator ride below!