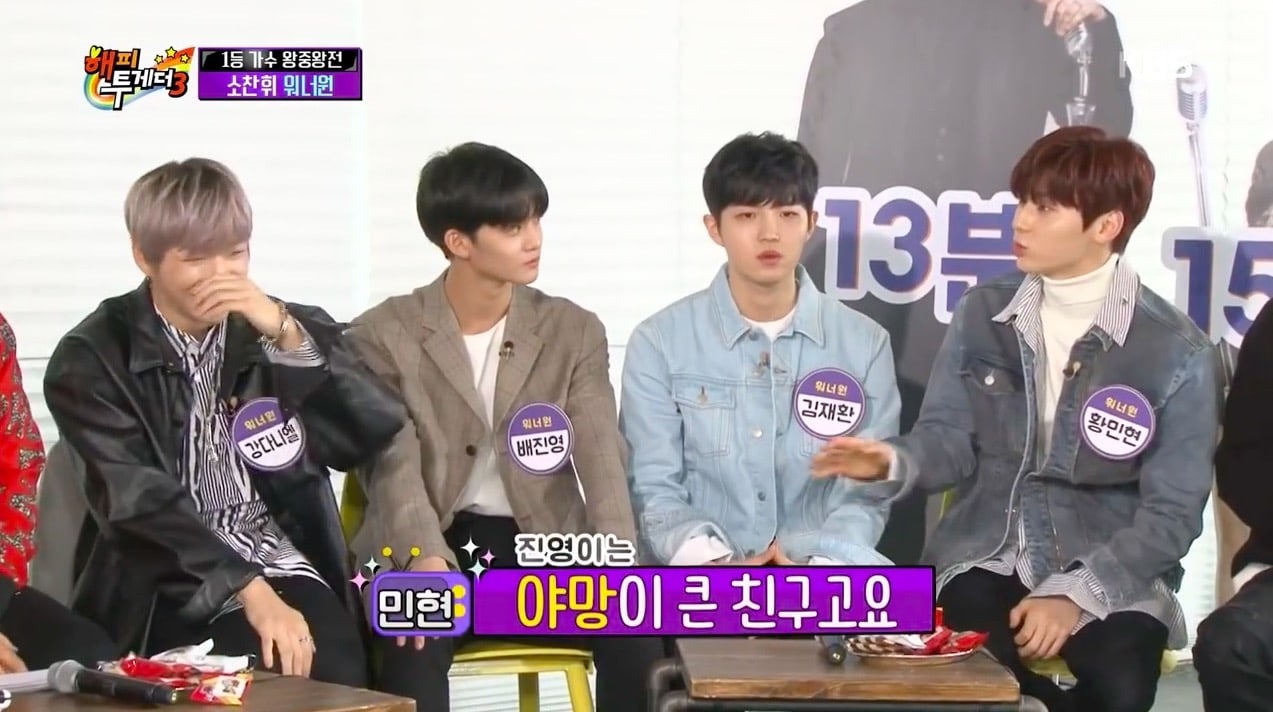 On this week’s episode of “Happy Together,” members of Wanna One revealed what Bae Jin Young is like when they’re practicing choreography!

First off, the members were welcomed back to the karaoke section of the show. Hwang Min Hyun, Kim Jae Hwan, and Bae Jin Young talked about how their parents had enjoyed watching them in their last episode, and Bae Jin Young made everyone laugh when he said that his parents had liked how much screentime he’d had.

Following everyones’ introductions, the hosts said that Hwang Min Hyun had something to reveal.

“Jin Young is someone with a lot of ambition in general,” began Hwang Min Hyun. “The time when that stands out the most is when we’re practicing.”

“There are eleven of us, so it takes a long time for us to learn our choreography and it’s tiring,” he went on to say. “We learn it the way that we’re taught, but there’s always someone who sticks out. Jin Young is always overdoing it, adding a lot more than what we learned.” 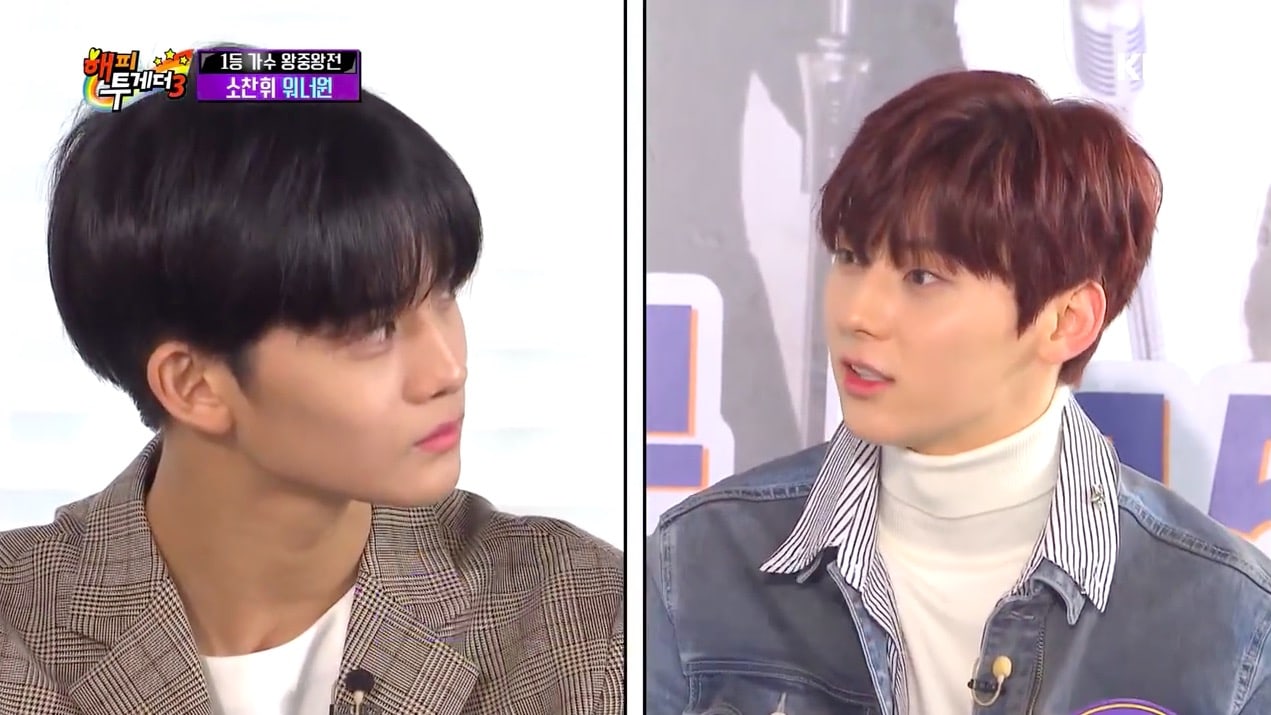 When host Yoo Jae Suk asked the guys to show what Bae Jin Young does during practice, Kang Daniel stood up to give a demonstration, and Bae Jin Young next to him laughed and tried to stop him. As everyone laughed, Bae Jin Young joined in and let him, but then asked Kang Daniel to go easy with it.

However, Hwang Min Hyun got up and did an imitation of Bae Jin Young dancing to “Energetic,” while Kang Daniel did the regular moves. Hwang Min Hyun threw in a lot of over-the-top gestures and moves as he danced. 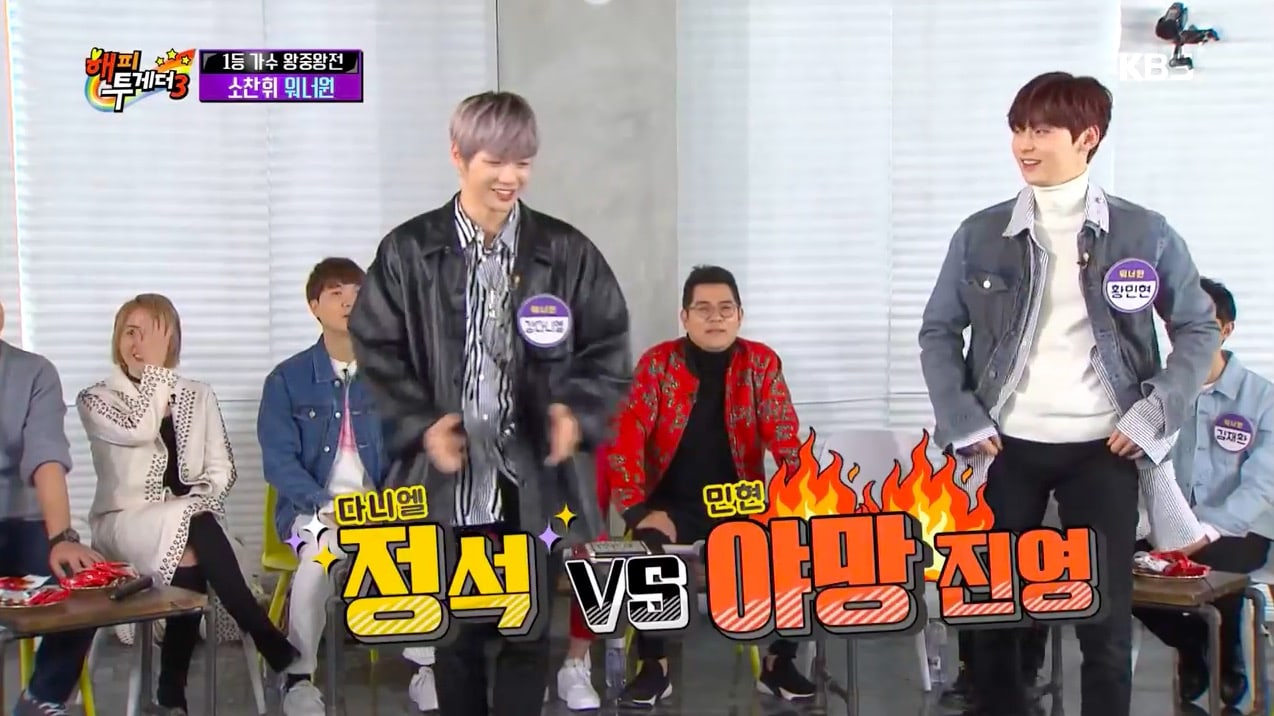 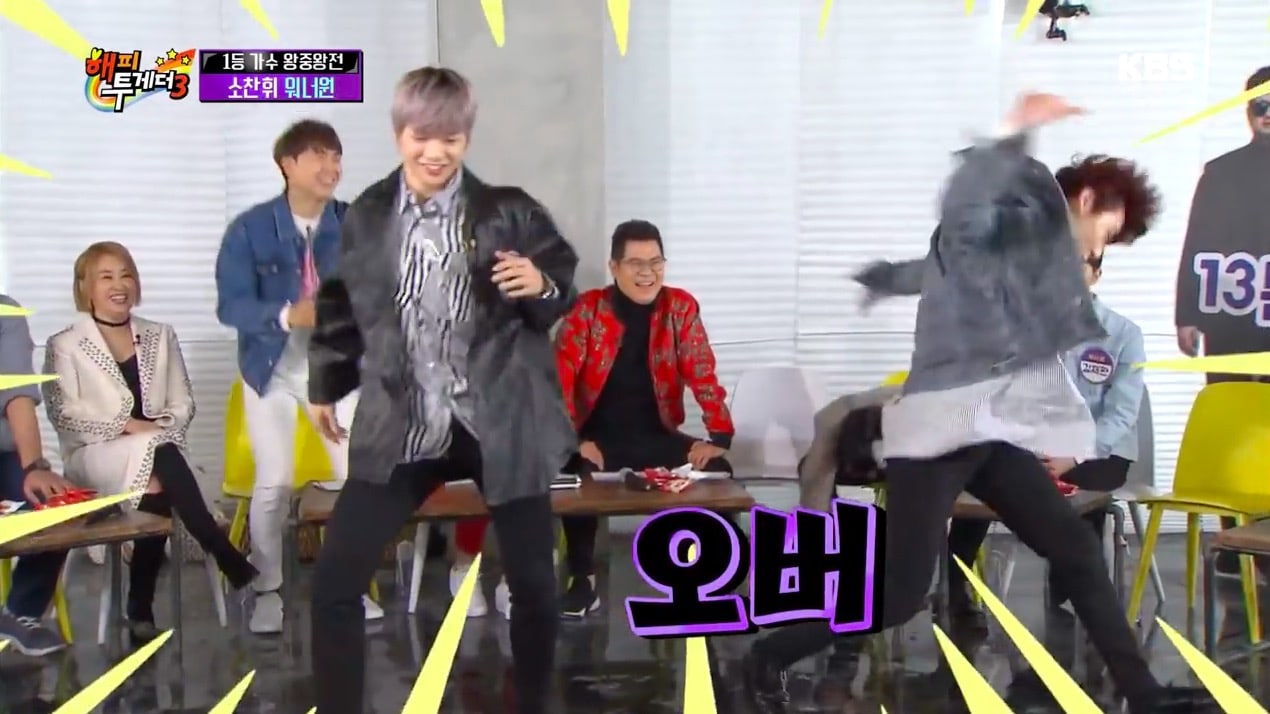 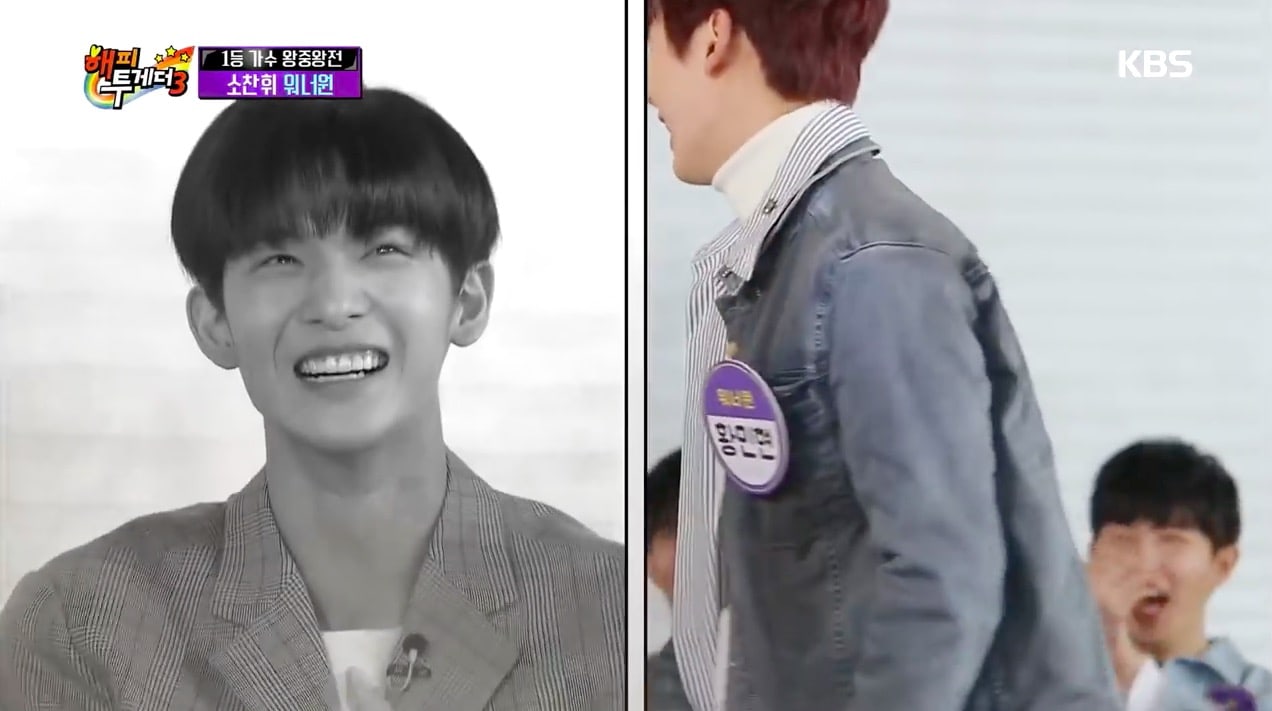 His impression had everyone cracking up, and Yoo Jae Suk even accused Hwang Min Hyun of exaggerating, but the members insisted it was true. They all then asked Bae Jin Young to get up and do his own version, with Hwang Min Hyun telling him, “You have to do it just like you do on stage.”

With all four of them dancing to the track, Bae Jin Young had the hosts and guests laughing and clapping as he showed his dancing! 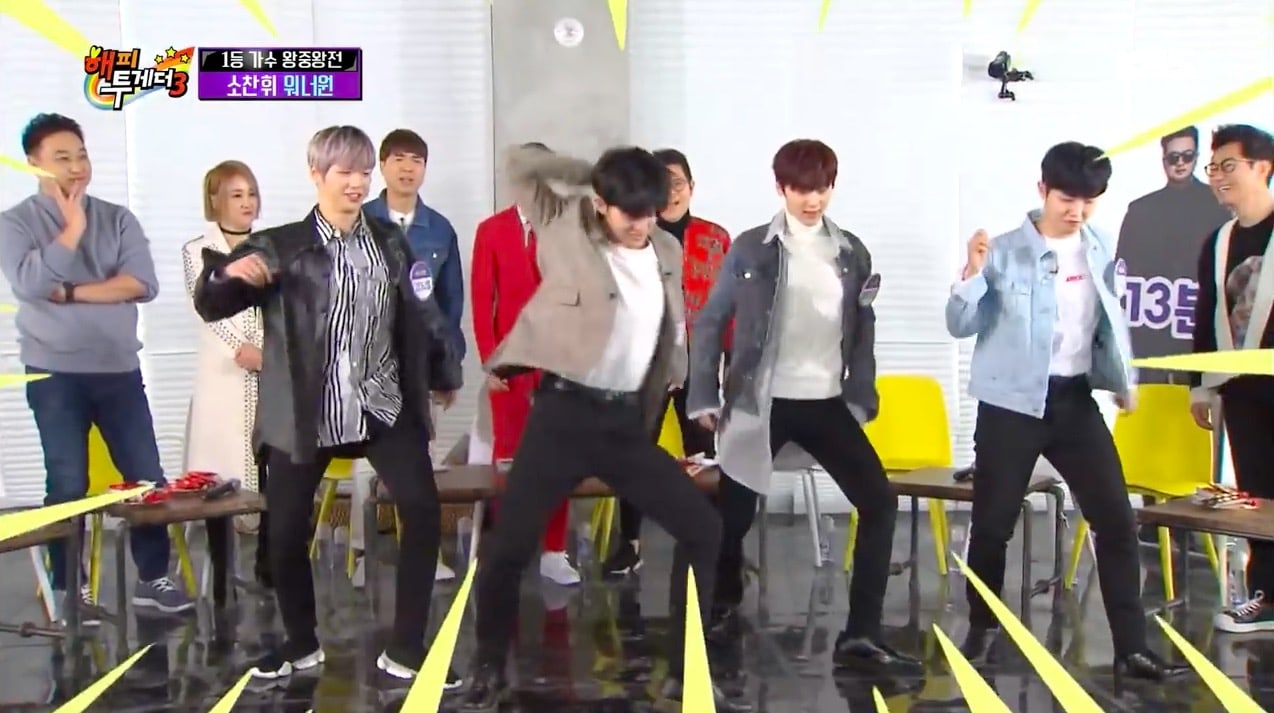 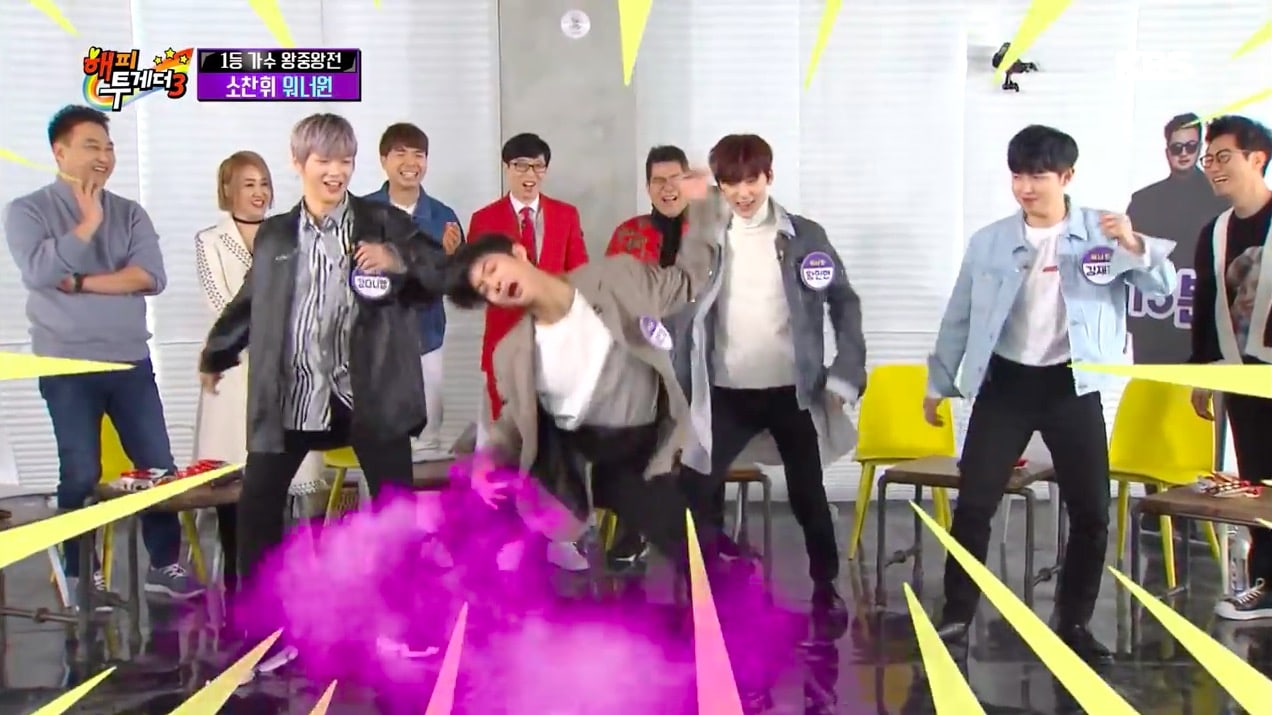 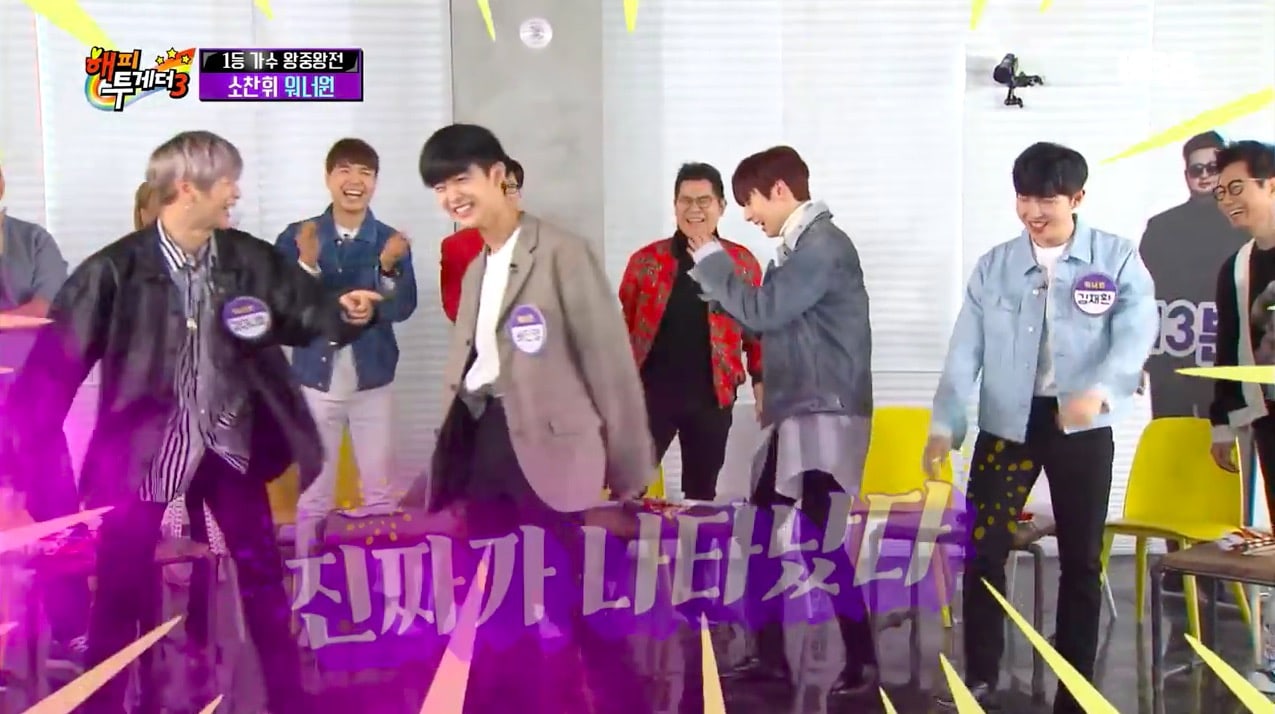