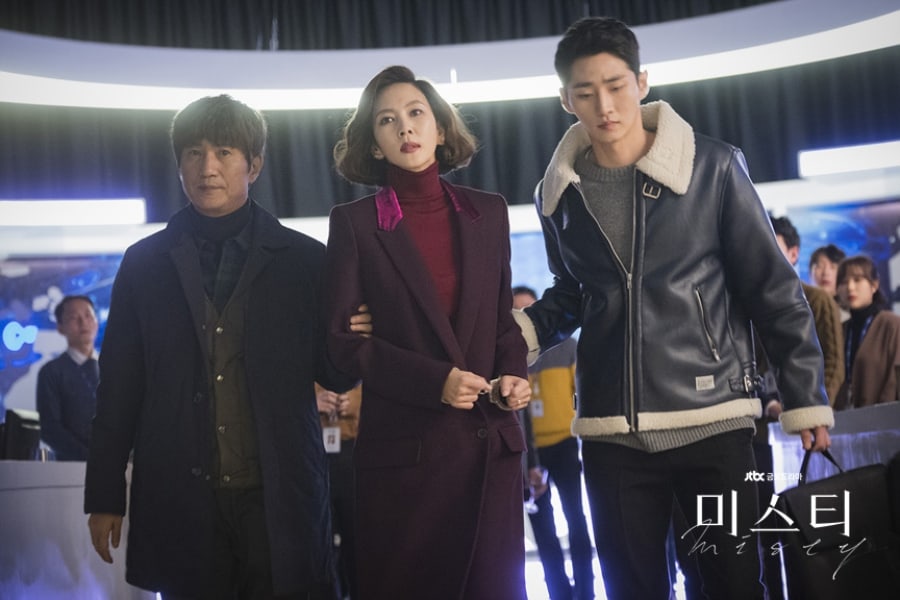 “Misty” Comes To Successful End With Highest Viewership Ratings Yet

The drama is a mystery thriller about Go Hye Ran (played by Kim Nam Joo), an anchorwoman who becomes a murder suspect, and her rocky relationship with her husband Kang Tae Wook (played by Ji Jin Hee), who becomes her lawyer for the case.

On March 24, the drama ended with its highest viewership ratings yet, achieving 8.452 percent with its final episode and breaking its previous record from March 17, when it recorded ratings of 8.058 percent.

The mystery was finally solved during the finale, with Kang Tae Wook turning out to be the murderer. He then went on to die in a car crash, though it remains unknown whether he intentionally ended his own life or if it was an accident.

With its intense plot and vibrant characters, the drama evoked a wide range of emotions in viewers with each episode and will be sorely missed. Here are three things about the drama that left a strong impression on viewers:

With a high-quality script and detailed production, the actors were able to create unforgettable characters with their own unique twist. Kim Nam Joo gained huge popularity with her masterful portrayal of talented news anchor Go Hye Ran. Ji Jin Hee was the perfect embodiment of melodrama with his emotional acting. Jeon Hye Jin and her unique character allowed viewers to become fully immersed into the show, and Im Tae Kyung left a strong impression despite “Misty” being his first drama. Go Joon captured viewers’ hearts with his sexy charisma, and Jin Ki Joo skillfully encapsulated the essence of his character.

“Misty” has established itself as a melodrama to be remembered. Both the drama and the cast have received considerable attention since the first episode. Achieving 7 percent viewership ratings after only six episodes, the drama has since managed to steadily increase its ratings.

Go Hye Ran did everything she could as she raced towards her dream of happiness. However, she was forced to doubt herself when asked at the end, “Are you happy right now?” Go Hye Ran responded by bursting into tears and saying, “I dreamed of happiness. The dreams that I thought I could achieve, and the happiness that I thought I could grab — I always thought that I had almost gotten it, but when I opened my hands, there was nothing.” Her blind pursuit ultimately ended with her realization of the truth and the lies in her life. Go Hye Ran’s journey as she struggled to chase after the things she couldn’t reach made viewers reflect on the definition of happiness and what is truly worth chasing.

Misty
How does this article make you feel?