On the March 28 broadcast of the radio program, MONSTA X introduced listeners to their sixth mini album and latest title track “Jealousy.” The group said, “Our last ‘Dramarama‘ album was ‘The Code,’ and this album is called ‘The Connect’ because it’s a continuation of our worldview.”

The group continued, “This album is filled with seven tracks. It’s an album we worked really hard on.” Wonho and Jooheon spoke about composing and writing the tracks “If Only” and “Special,” and admitted they were disappointed that their tracks weren’t chosen as title tracks.

DJ Song Eun Yi mentioned that Celeb Five and MONSTA X used the same practice room and the idols replied, “You practiced later than we did. It was admirable.” 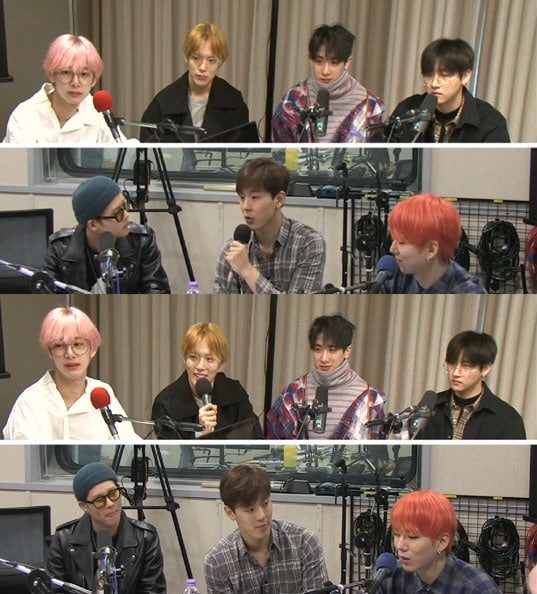 The members also shared first place promises for “Jealousy.” They said, “Wonho and Shownu are fit, and Hyungwon and Minhyuk are skinny. If we get No. 1, we’ll perform with the two skinny members carrying the two buff members on their backs.”

DJ Kim Sook suggested, “How about changing your hairstyle, with one person doing a cherry blossom hairstyle for instance?” The group replied, “That’s new. If we get first place, we’ll try swapping outfits or hairstyles.”

The group also named beef tartare and ramen as their food of choice when eating out at as a group. When asked why they chose beef tartare, MONSTA X answered, “It’s luxurious and not greasy. Our faces don’t bloat after eating it and it’s a good match for us.”