Ryu Jun Yeol talked about his latest films “Little Forest” and “Hit and Run” (working title) and his co-stars during a March 29 broadcast on Naver’s V Live.

“Little Forest” is a film where Ryu Jun Yeol, Kim Tae Ri, and Jin Ki Joo appear as childhood friends who reunite in the countryside.

Ryu Jun Yeol said, “Kim Tae Ri and Jin Ki Joo are full of appeal that can’t be hidden. I thought Kim Tae Ri would be really calm, but she’s fun and cheerful. Jin Ki Joo seems like she’d be full of fun chatter, but she’s calmer than I thought. I think that is their unexpected charm. It was fun while filming the movie.”

While reminiscing about filming “Little Forest,” he continued, “When I met them, I gave each of them a letter and they still make fun of me for it. In the past, they used to say to me, ‘You’re busy,’ but now they’ve become busy. It’s not easy to meet up these days. When I met Kim Tae Ri and Jin Ki Joo, I had lots of expectations and it felt new. Before our first shoot, we met up at the dorm and talked about this and that. I still can’t forget it.” 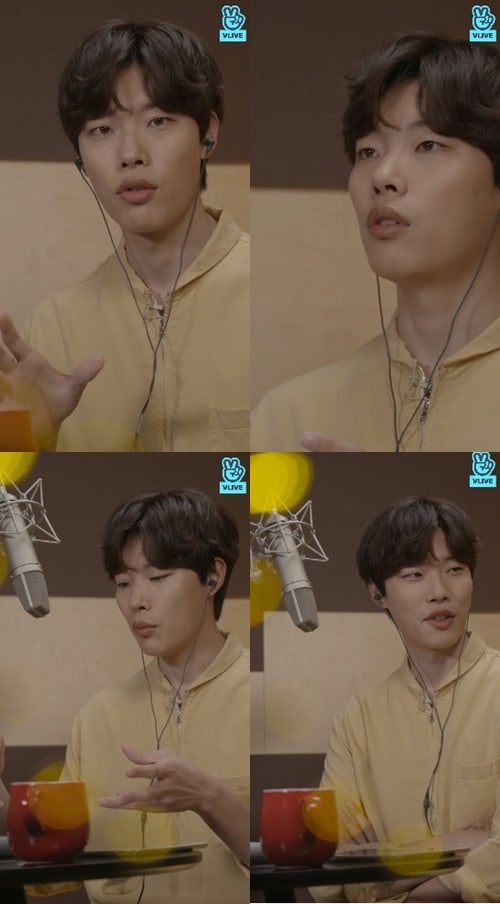 He added, “It felt like starting a new school year. I think we also said that the three of us should take on the responsibility for the film from start to finish. I acted while feeling half-nervous and half-excited. I think I’m falling more easily into the memories from that time because of the radio format of today’s broadcast.”

The two actresses also submitted a question and asked why and when he began to write “I love you. Love each other,” next to his autograph. He replied, “This is a very embarrassing question. In the beginning, I used to write the date. When I gained many fans after ‘Reply 1988,’ I wanted to give them love. After thinking about what love was, I began to write it.”

He added, “My favorite word is love. Later, I want to name my child Sarang [love in Korean].”

The actor said, “When I see Gong Hyo Jin walk out of hair and makeup, I can feel her aura. Just breathing next to her makes me feel nervous and my heart flutter. When I go next to her and tell her that she’s cool, she says, ‘Why are you paying me lip service,’ but she really is cool.”

“Hit and Run” is set to premiere during the second half of 2018.