BTOB’s Eunkwang recently sat down with MyDaily to talk about appearing in the musical “Three Musketeers.” He opened up about the support he gets from his fellow BTOB members, as well as his experience performing in musicals as an idol.

BTOB is now in their seventh year as a group, and the members are currently focusing on individual activities. Eunkwang confessed that he still has some stage fright when he has to stand on stage by himself without the other BTOB members. He said, “I’ve always been with the team, so when I’m up there by myself, my legs still shake from nerves.”

However, he added that he gains a lot of strength from the support that the other members give him, especially from Changsub, who is also expanding his activities into musicals. Eunkwang said, “The two of us don’t really talk about our musicals because we’re both the kind of people who prefer to do things on our own, but we motivate each other a lot. When he’s busy with musicals, people always tell me, ‘He’s really good and he always works hard.’ Hearing that pushes me to work harder so that Changsub can hear only good things when people talk about me too. It’s a friendly competition that pushes us both to do better.”

Eunkwang talked more about BTOB’s support as he said, “When I was appearing on ‘Hamlet,’ I was really worried because it was my first musical in a while. I didn’t feel confident and I felt intimidated, but the other members came to watch me perform and Hyunsik and Changsub told me, ‘You belong on the musical stage. You are at your coolest when you’re on stage in musicals.’ Hearing that made me proud of myself.” 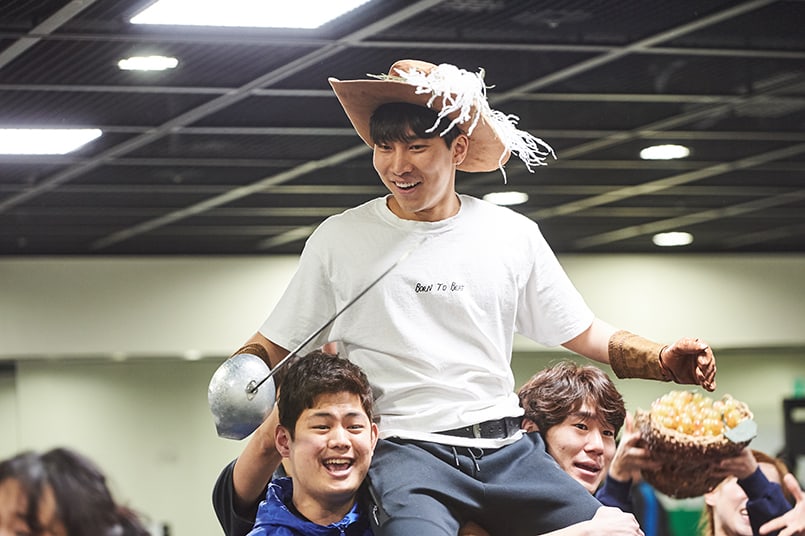 Not only does Eunkwang receive support from his fellow members, but his fans and regular audience members as well. He shared that his fans will tell him that he gets better with every performance and it’s nice to see him growing as a musical actor as he gets used to the stage. He also added, “Our fans will bring their parents with them, who say, ‘He’s really an idol?’ when they see me. When I read reviews like, ‘He was really good. He’s an idol?’ it makes me so proud and grateful, and it gives me strength to keep working hard.”

Though he appreciates that people are recognizing him as a musical actor, he still tries to incorporate his talents as an idol to make his characters his own. He said, “At first, I tried to push down my characteristics as an idol because I was worried I would stick out too much from the rest of the cast. But then our director said, ‘You’re too stiff. You’re an idol, it’s okay to show off your charms more.’ They advised me to use the fact that I’m an idol as an advantage instead of trying to hide it. That helped me feel more confident, and I started trying to put my own spin on my characters as an idol.”

BTOB’s Eunkwang is currently performing in the musical “The Three Musketeers,” which will be on till May 27.