Rappers Haon and Vinxen from “High School Rapper 2” are ruling over the charts!

As part of the Mnet competition show’s March 30 episode, there was a performance competition for spots in the semi-final. Haon and Vinxen teamed up with mentors GroovyRoom to create the song “Bar Code,” and they secured a place in the semi-final when they received a score of 471, the highest among the contestants.

On March 31 at noon KST, “High School Rapper 2” released the tracks from the competition, and “Bar Code” quickly rose to first place on realtime charts.

As of April 2 at 11:30 p.m. KST, “Bar Code” has now achieved the impressive feat of grabbing a “perfect all-kill” on the charts. This means the song is No. 1 on iChart’s weekly and realtime charts, and No. 1 on the daily and realtime charts of all six major sites (Melon, Genie, Bugs, Mnet, Naver, and Soribada). 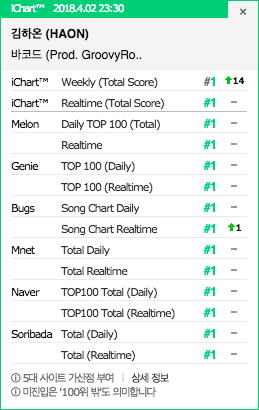 The guys have posted to celebrate the song’s achievements on Instagram, sharing their love for GroovyRoom and crediting them for the success.

Take a listen to the song and check out their performance below!