Watch: “Weekly Idol” Introduces Its 3 New MCs And Shares Preview Of Their Welcome Party With Lots Of Idol Guests

MBC every1’s popular variety show “Weekly Idol” has shared a preview of the first episode with its new MCs!

In the April 4 episode, the show gave a hint of what’s to come from new hosts Yoo Se Yoon, Kim Shin Young, and Lee Sang Min by showing interviews with them as well as a brief clip of their celebratory special with many guest idols. 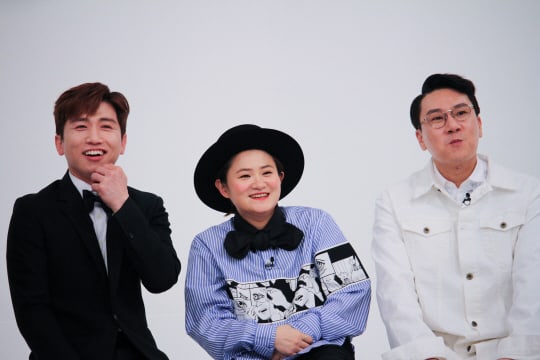 Yoo Se Yoon was the first to be interviewed, and he asked the staff who he’d be MCing with. When they named Kim Shin Young, he smiled and showed his confidence in her as he said, “Oh, well it’s all set then!”

In her interview, Kim Shin Young explained that she wants to try doing really simple things, like playing a twist on a popular Korean card game that she assured makes everyone really excited. The clip then showed footage from their welcome party, with the idols and hosts truly getting excited over just the simple card game!

Lee Sang Min joked in his own interview that Yoo Se Yoon and Kim Shin Young are the type to make things get out of hand.

“Weekly Idol” then shared a clip of the idols and hosts in the studio for their welcoming party. Idols who have been confirmed for the show include members of Wanna One, BTOB, Apink, GFRIEND, SEVENTEEN, and MAMAMOO, although many more can be seen in the preview!

In addition, Kim Shin Young surprised the staff when she said, “If the show surpasses 3 percent in the ratings, I’ll shave my head.”

See who you can spot in the preview below!

This episode of “Weekly Idol” will air on April 11.