MBC’s variety show “It’s Dangerous Beyond the Blankets” premiered on April 5 with complaints from some viewers.

“It’s Dangerous Beyond the Blankets” is a reality show where celebrity homebodies hang out and go on relaxed trips together. After the pilot episode gained huge popularity, the show was chosen to be a regular program.

On the April 5 episode of the show, Wanna One’s Kang Daniel, rapper Loco, actors Kim Min Suk, Lee Yi Kyung, Lee Pil Mo, and entertainer Tak Jae Hoon made an appearance. After some of the cast made their awkward hellos, they had dinner together and headed off to an observatory.

What was different from the pilot was that there was an age gap between the cast members as Tak Jae Hoon and Lee Pil Mo are in their 50s and 40s.

While this allowed viewers to see various homebody celebrities of different ages, some expressed discomfort. They pointed out that unlike the pilot episode where the members got along naturally, there was a certain age hierarchy among the members in the premiere. Younger cast members kept their polite attitudes toward Tak Jae Hoon and Lee Pil Mo while the older two took on the roles of seniors. 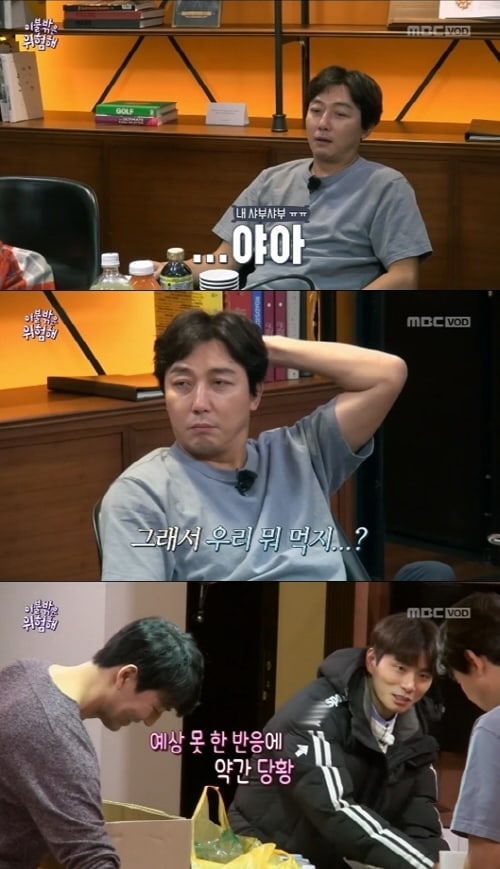 Lee Yoon Hwa, the producing director of “It’s Dangerous Beyond the Blankets,” explained that she didn’t deliberately cast older members. Instead, she said that she thought it would be a good way to represent different kinds of people.

“The first meeting was simply an orientation and an opportunity to meet different people and know what they’re like,” she said. “We invited Tak Jae Hoon just for the orientation as one member of various homebody groups. Lee Yi Kyung’s character was interesting and refreshing. I thought he could function as a device to embrace different personalities, but it seems he appeared pitiful. I’ll reflect on what many people were uncomfortable with and take this into consideration in the future.”

Tak Jae Hoon’s attitude toward Lee Yi Kyung was one of the controversies. Viewers pointed out that Tak Jae Hoon did not use honorifics when he first met Lee Yi Kyung, which could be considered rude as it was their first time seeing each other. Tak Jae Hoon also appeared dissatisfied after Lee Yi Kyung came back from grocery shopping, and refused to eat the meat Lee Yi Kyung had cooked for him.

PD Lee Yoon Hwa shared that the upcoming episode of “It’s Dangerous Beyond the Blankets” will feature new members. The cast will set out on a journey to various places to relax.

“It’s a trip that involves quietly lying down and enjoying the sea breeze,” she said. “All the cast members wanted to relax due to busy schedules and things turned out great. I think we’ll go on as we’ve done so far regardless of viewership ratings.”

“It’s Dangerous Beyond the Blankets” airs every Thursday night at 11 p.m. KST. Check out the pilot episode below!

Tak Jae Hoon
Lee Yi Kyung
It's Dangerous Beyond the Blankets
How does this article make you feel?