Wanna One showed off their unique talents on JTBC’s “Ask Us Anything.”

On the April 7 broadcast, all 11 members of Wanna One appeared as guests. Lee Dae Hwi said he could try to imitate Lee Sang Min‘s famous “crying rap.” After Lee Sang Min showed the original version, Lee Dae Hwi followed with his imitation.

The variety show members laughed and commented that his rap reminded them of actor Park Young Gyu instead and told Lee Dae Hwi to say that he can imitate Park Young Gyu from now on.

Kim Jae Hwan then confidently stated, “I can do a vocal imitation of BIGBANG’s G-Dragon,” and sang a line from BIGBANG’s “Last Dance.” After listening, Kang Daniel and other members laughed and asked, “Are you a grandpa?” 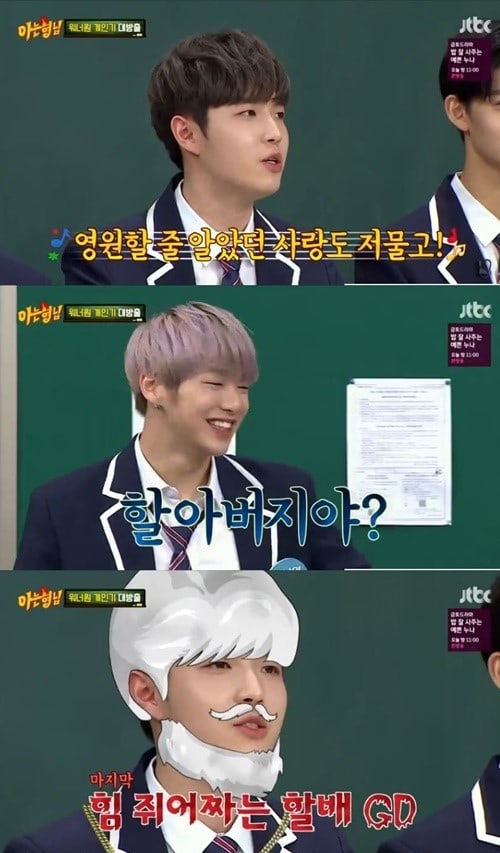 Kim Jae Hwan protested, “That was just me warming up,” and tried again by singing a line from G-Dragon’s “Untitled, 2014.” This time, people reacted with comments that he sounded more like the singer Cho Yong Pil.

The Wanna One member then treated everyone to a performance of him singing while playing the guitar. He teased, “A special instrument will appear in the middle” and sang an acoustic version of Sunmi’s “Gashina.”