Yang Se Hyung was unrecognized by fans and airport security in Vietnam on SBS’s “Master in the House.”

At the airport, the members could hear fans waiting for them and walked out excitedly to see who had the most popularity in Vietnam.

Yook Sungjae was surrounded by fans in no time and many people crowded the members, making it hard for them to get to the bus.

Lee Sang Yoon saw this and said, “Yook Sungjae’s popularity is no joke.” The actor also had fans waiting for him and he thanked them for their gifts.

Lee Seung Gi was also followed by many fans and received flowers welcoming him to the country. Behind Lee Seung Gi was Yang Se Hyung who shouted, “I’m with them!” and tried to keep up with his members.

An airport official even tried to pull Yang Se Hyung away from Lee Seung Gi, mistaking him for a fan. The actor told a staff member, “Take care of Yang Se Hyung” as Yang Se Hyung shouted, “[I’m his] friend! Me too!” 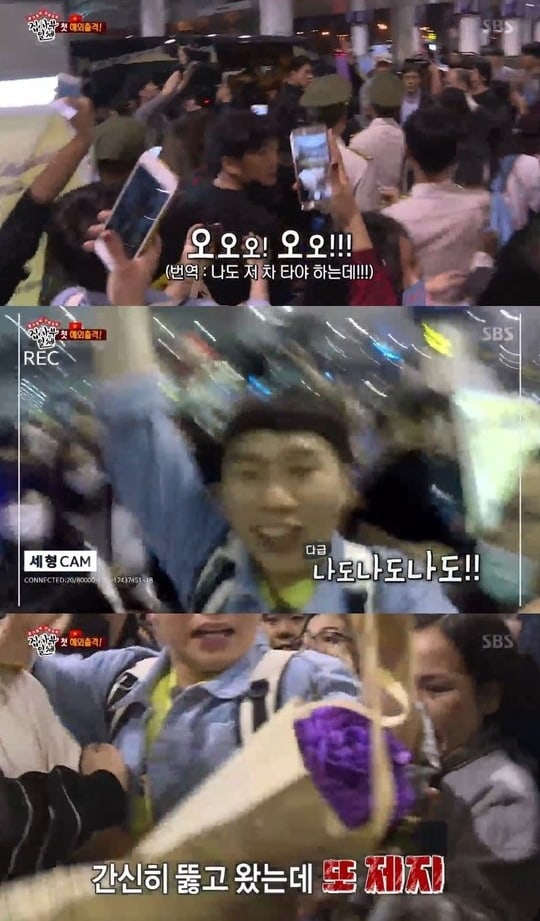 After making his way through the crowd, Yang Se Hyung was about to board the bus when security guards blocked his way once again. He was finally able to get on and reunite with his members. Yang Se Hyung expressed sadness at not being recognized by the Vietnamese people at the airport. He said, “A man pulled me back” and “I hope my mom doesn’t watch this part.”

Watch this episode of “Master in the House” below!

Lee Seung Gi
Yang Se Hyung
Master in the House
How does this article make you feel?